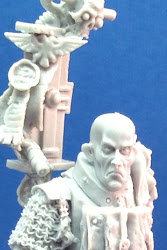 See what happens when I have a deadline looming? I get productive!

Originally I was hell-bent on recreating, and re imagining even, my Ordo Xenos Inquisitor that I did two years ago for Golden Demon. I planned on using the new plastic Farseer as a base for the conversion and even found a metal Harlequin Shadowseer for his staff for the project. The reality of the situation is I just have too much going on, and need more time to devote to that project as the concept for it just isn't as clear as it was for the Tech Magos.

Quickly switching gears, I dove into my available kits and models and inspiration struck for a new Inquisitor…

Now typically I am securely in the Ordo Xenos camp, with slight leanings towards Malleus for my interests in modeling and story. Hereticus just makes me shake my head at it's blind zealotry. However, when I was sifting through my parts and kits for inspiration, I came across this year's Forge World Event Figure I got at Adepticon, and the following parts, and a Ordo Hereticus Inquisitor was quickly born.

Inquisitorial Sword I bits-ordered a LONG time ago 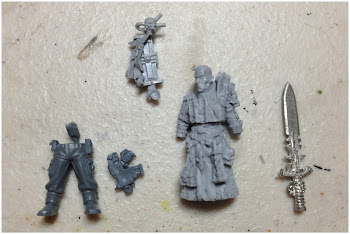 The first thing I did was cut off the Priest's bare feet and smooth out the bottom. I drilled two holes where they were, then trimmed off the boots from the Guardsman's legs, also drilling them for pinning. To continue with the pinning-prep, I drilled into this right shoulder blade and also into the Henchman's banner-bit. 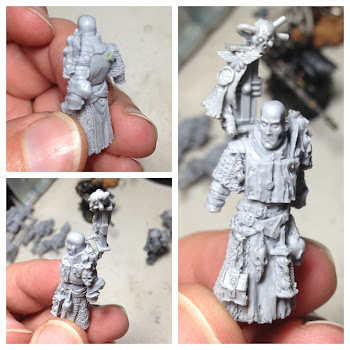 A little glue, some green stuff, and a touch of floral wire later, I pinned and secured the back piece for the figure into place. I used the green stuff to give it the proper angle I wanted, rather than just glueing it straight to the figure, as it would have been leaning awkwardly otherwise. 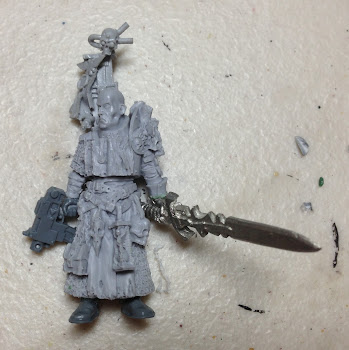 The next steps were to get the feet and new weapons in place. I did a combo glue and green stuff into the pinning method of the feet so they would bond to the figure. Once the glue set, I trimmed and shaped the semi-cured green stuff into a smooth filler for the gaps between the feet and the bottom of the figure. The two hands were simple trim-and-pin jobs as well, though I did need add a touch of green stuff to the bond for the metal sword hand, as it needed a touch of strength with the glue, and I was able to smooth out any gaps as well. The bolt pistol hand slipped right into place as if it had always belonged. 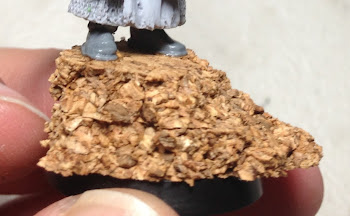 The base I built up for him, I really built up. It's a full thickness of cork taller than any of the other figures, to give him addition height, and I trimmed it up in a way to try and draw your eye up from the ground and then up the figure. 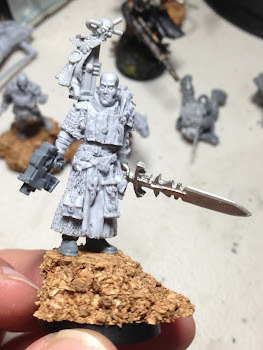 The sword, bolt pistol and back piece form a nice triangle with his head in the center of it. This is an excellent way to draw the viewer's focus on the wonderfully expressive sculpt of his face. It also means I'm going to have to do one heck of a job painting it as if I don't, you'll notice it quick! 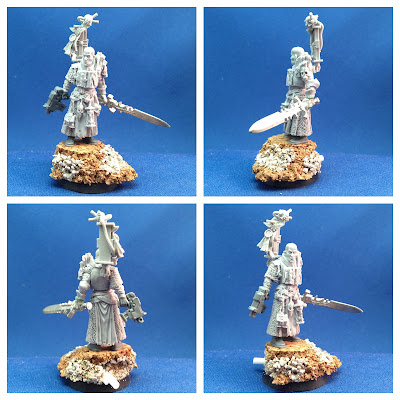 This is him finished and fully based. Nice, simple cork basing, with 4 different grain-sizes of ballast and some plastic rod for broken piping.

All-in-all, a quick and effective conversion, I think...but let me know your thoughts! I'm loving this pace and project so far.

Tomorrow, the rest of his crew!

Posted by Miniature Tim at 8:43 AM