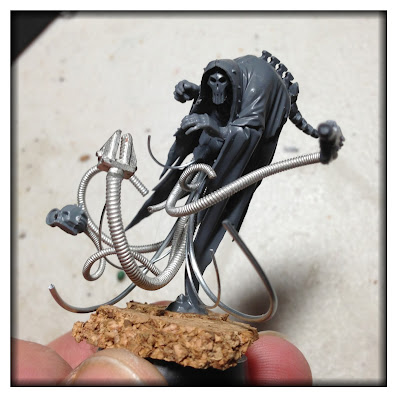 I did it…I finally took the leap and designed something for Inq28. Of course, it helps that I have the ulterior motive of placing an Inquisitorial Warband into the 40K Squad entry for Golden Demon at Games Day, but that's besides the point.

Originally I was going to be working on this over vacation, but filleting over 75 fresh-caught trout and vacuum-sealing them took far more time throughout the week than I had originally planned. Ah well, I'm still on track…a hastened track, but still on one, to get it all completed by Games Day.

Enough with the yammering, on with the conversion!

Like many, I've found that the Vampire Counts Cairn Wraith offers a wonderful base for conversion, especially for a Tech Magos. Now, in no way, shape, or form am I the first, third, or fifth person to think this or do something with it, but I couldn't just let the possibility pass. What I will do, though, is pass on the assembly of the Cairn Wraith's main body, as I think we all are familiar with it by now.

Hands from the Necron Command Barge

"Tabard" from the Necron Triarch Praetorians 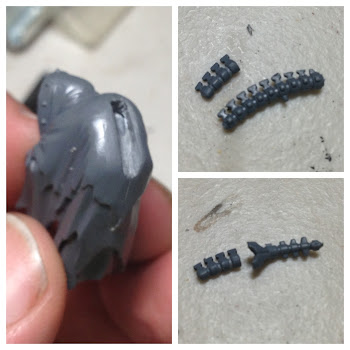 After Assembling the Cairn Wraith, I very carefully carved out a recess in the middle of his back for the a section of Necron spine. I also trimmed up the spine to lessen the Necron "feel" a touch, but those who know the piece, know exactly what it is. Adding a touch of Plastic Rod, I cemented a second piece of spine, more of a tail bone really, to the first to give a bit more of a finished look to the addition, and begin to add additional movement to the figure. 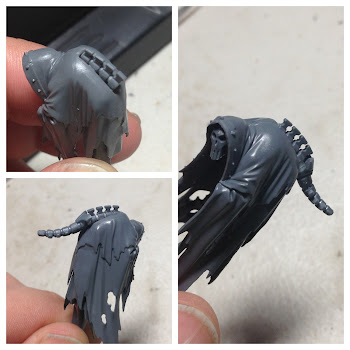 Once that was done, I continued to play with the Necron bits, and added two hands from the pilots of the Catacomb Command Barge. Originally I was going to have him wielding a Mechanicus axe, but then changed direction with him. I wanted this Magos to be one that relied completely on his mechadendrites for his 99% of his needs, so out went the axe, and one went the very expressive hands. 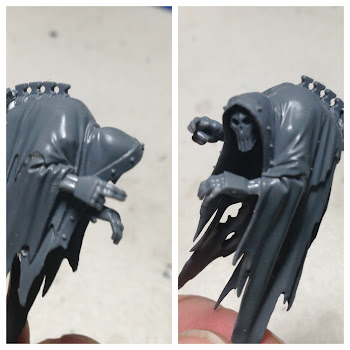 I secured a small layer of Green Stuff to the inside of the Magos as an anchor for the mechadendrites I was planning. Taking the Floral Wire and the Power Cables from Dragon Forge, I cut them all to lengths and began twisting and forming them into very expressive shapes and poses. I wanted the Magos to have the feel that he was suspended with some form of gravity field, with the mechadendrites writhing beneath him, almost with a life of their own. I secured them all with glue into the Green Stuff and let it cure. 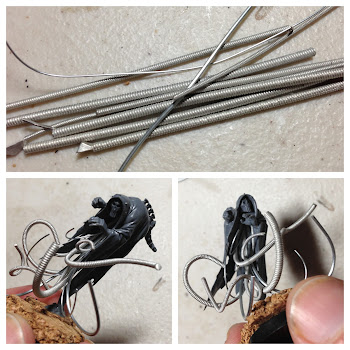 I wanted more though, and decided there would be a few additions to the cabling. Mainly a weapon, a tool, then a Servo Skull. The Las Pistol got trimmed and cleaned, seating very nicely at the end of one mechadendrite. I then trimmed the clamp from the servo arm from Cronos, and pinned it to the largest of the cables, while drilling a hole into the servo skull and seating it onto a third. The rest are left bare as I think any more will begin to complicate the figure in a bad way. 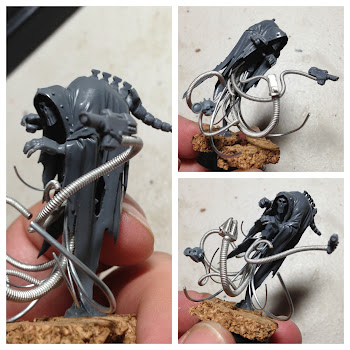 Lastly, I needed to hide the core of the insides. Taking the "loin cloth" from the Necron Praetorians, I trimmed it up slightly and slipped it into place. It gives exactly the feel I was looking for. 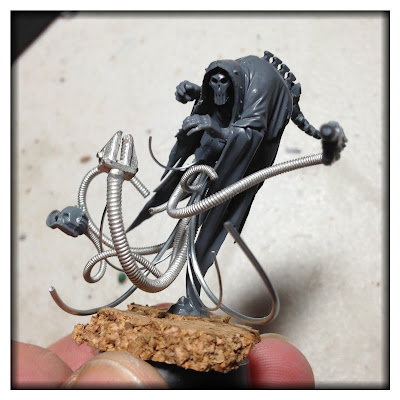 The basing still needs a touch of work, but this is the figure, pre-priming, finished. I'd love to hear your thoughts and critiques! I'll be posting like mad over the next 8-9 days leading up to Games Day, so look forward to more!

Posted by Miniature Tim at 8:42 AM