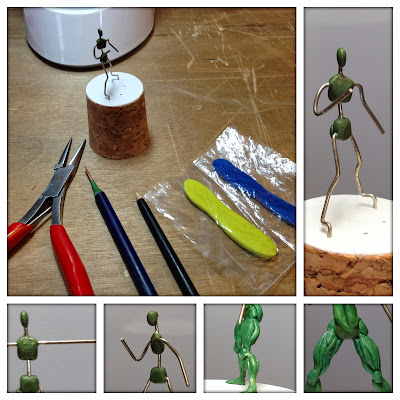 Originally this was going to be the final Adepticon Coverage report. Considering this is more of a synopsis of one single class I took at Adepticon instead of overall coverage of an event or something larger, I thought I'd separate it out and really dig into not just this class, but sculpting in general to some degree.

My forays into sculpting started back in 2006-ish, with my Black Templars, teaching myself ways to sculpt wild fur to somewhat match the Fantasy Chaos Warriors, and capes/cloaks. Fast forward to about 3 years ago, and I hadn't gone any farther in my Green Stuff skills. Not because I didn't want to, but more because I was intimidated by sculpting. So in 2011, I took a class by Joe Orteza at Adeption to learn some basic Green Stuff Sculpting skills.

Turns out I never needed to be intimidate. Why?

Not because I was just that good, far from it, but because there were techniques and methods in that first class with Joe that demystified the whole world of sculpting for me. It all boiled down to one key phrase that Joe said…

"All you're really doing is pushing around green stuff."

That's the God's honest truth about it too. You don't actually sculpt with green stuff, you just move it around in ways and into places you want it so that it takes on the shape of what you want it to look like. There is always the experience factor to account for, as the more you do it the better you'll be, but that's true with anything from painting to playing the games we love.

During that initial class with Joe, we learned how to create purity seals, feathers and a more natural fur rather than the wilder version I knew how to do. Ultimately though it was just what the title advertised, an introduction to Green Stuff, but an introduction that helped open my eyes. 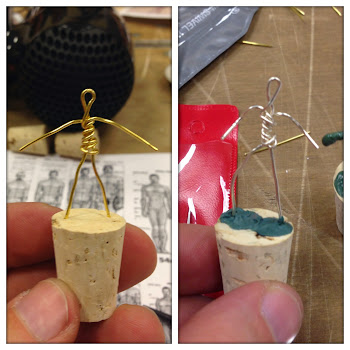 Last year, Joe offered a new 3 hour class at Adepticon; an Advanced sculpting class, where we would be going for the entire figure, and not just some basic techniques. The prerequisite was to have taken his Basic class. There were only 6 of us in the class to better allow him to teach, guide and help each of us. We went through one way to create an armature, how to pose it, and ways to begin adding green stuff to it. I ended up getting far enough to begin shaping form with the GS on my armature into a rough female figure. Unfortunately we all ran out of time, and it was getting late. Joe mentioned making the class a 4 hour one this past year, but I wasn't able to take it again to find out if that happened. There were some interesting techniques using hair dryers and then the cold air (or a refrigerator) to both give us some additional working time, or speed along parts of the process. Again, it was a very eye-opening experience that just continued to give me more confidence with sculpting. 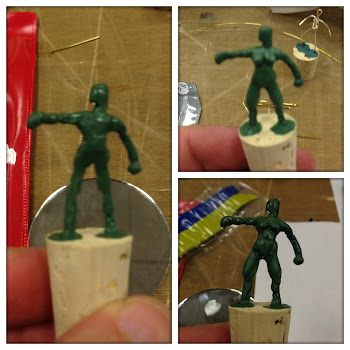 Now did I take it anywhere past that one class? Of course not, I'm a gamer. We all procrastinate and waste time without actually doing anything, right?

This year, like I had said before, I wasn't able to take Joe's class again. However I was able to take a Class by Kev White from Hasslefree Miniatures. This time around it was only a 2-hour class, and I was afraid I wouldn't get anything done. The good news is that I couldn't have been more wrong! 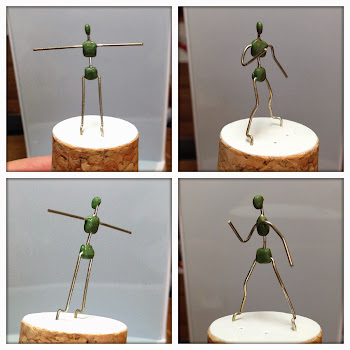 Kev brought premade armatures, as he creates his by soldering two wires together instead of twisting them. I can't say this method is better or worse than the twisted wire-armature that Joe taught us, but it was new. It also saved time. He also brought tools for us to use, just like Joe did, but his were of a completely different philosophy. They were shaped out of old brush handles! This let us use a new technique for lubricating the tools, and that using the natural skin oils from our foreheads and noses, rather than water or something else. The natural oils form our skin actually evaporate, so no residue is left. 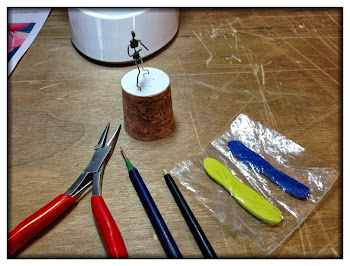 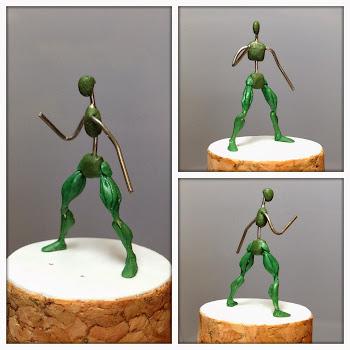 We worked on posing the armature, and then began to work some green stuff onto it. However Kev's process of doing so had us building up some basic muscle groups onto the wire frame. Something about this clicked finally with me, considering I use a very similar philosophy for illustration. I rough out the wireframe of a person, block in the major forms of the body, then 'dress' them so-to-speak. Once that light went off in my head, so much more made sense. Even going back to techniques and things that Joe had said a year ago that just didn't ring for me for some reason. I wish it had back then, as I would have gotten so much more out of what Joe was trying to drive into this thick skull of mine. 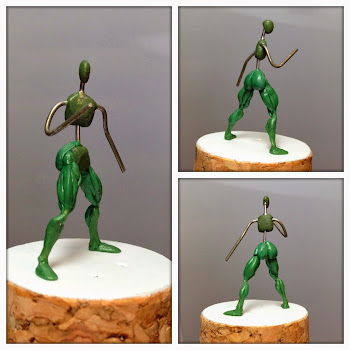 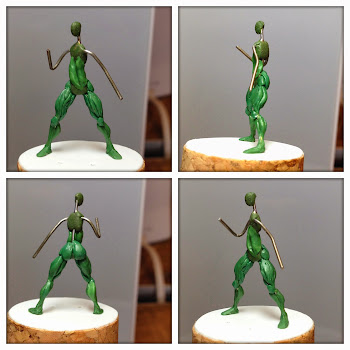 Ultimately, I only got the legs roughed up, and started in on the abdominals before we ran out of time, but the core is there for me to build on and really just take off running with.

Anyone else take one of Joe's or Kev's classes? Anyone intimidated by working with Green Stuff that maybe isn't so much any more? Anyone want to know more?