Adepticon 2014 Coverage: The Calm Before the Storm 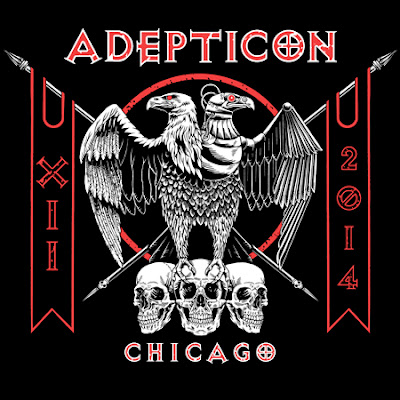 You've been following my prep for Adepticon for the past month or so now, and finally all that work has come to fruition. Last Wednesday I left St. Louis for more windy pastures, and landed in Lombard IL for my 8th Adepticon. I've loved each and every one of them so far, and this trip was no different. Yet at the same time, in some ways it was completely different for all the best reasons!

And so starts the beginning of post-Adepticon coverage!

My friend and I got in late Wednesday night so that we could register early, and just enjoy the start to the weekend. To our surprise, Black Library had already opened for business! We quickly finished our ViG registration and slipped straight over to BL and get a head start on some retail therapy to recover from the drive. I snagged some limited edition art prints, the cover to the Tau Audio Drama Kau'Yon, and then two Salamanders prints. I had Andy Smillie sign the Tau art work since he wrote the audio drama, and Graham McNeill sign the book that was in my swag bag. 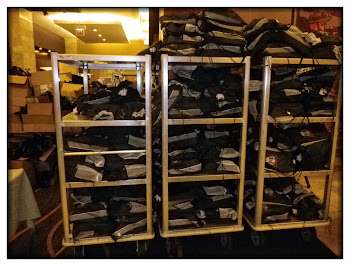 Speaking of the swag bag, there were some nice pieces in it aside from the Heresy Novel of Graham's! There was a nice figure from the Wild West Exodus game, the event figure from Victoria Miniatures, some of Badger's new primer, a piece of cargo container terrain, as well as starter box for WarmaHordes Retrubution, and more. I do believe I'll paint this starter box up and toss them on eBay. 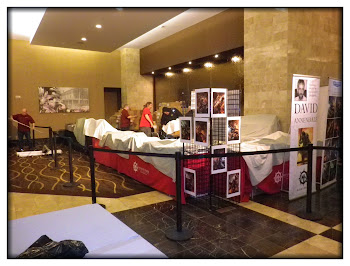 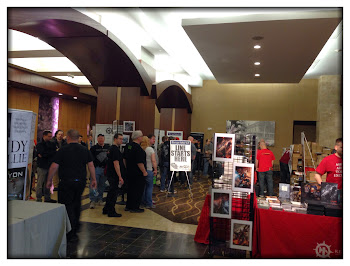 After dinner that night, I caught up with Alex from Ironheart Artisans, dutifully finishing the painting on the terrain he brought for one of the Zone Mortalis boards along with some other folks and promptly shared some of the chocolate chip cookies my wife made for me to bring and share with friends and opponents. I was able to snag some pictures of Forgeworld and Black library after they closed, as well as the main ballroom while it was nigh on empty before the sheer onslaught of gamers descended once the weekend truly hit. Below is the shot of my army, along with some other additions that tagged along for the ride, in my hotel room. 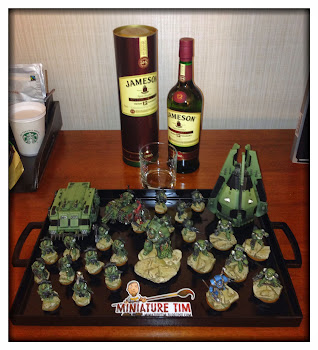 Thursday more of my friends came in, specifically my teammates for the 40k team event as well as others. The day was spent catching up with yet more friends whom I just don't get to see nearly often enough.

Friday I took a class on sculpting with Kev White from Hasslefree Miniatures that was just simply eye-opening. Expect a full post on that! Sprinkle in even more friends from around the country, along with ogling armies that were simply inspiring, and this was a good day. I also ended up ordering a squad of Pyroclasts from Forge World for my Salamanders. I also added to my Infinity Yu Jing with a box of Celestial Guard, the O Yoroi TAG and Saito Togan. Later that night I was able to score some great Bitz for my future Tau projects and some loose PanO figures I got as well.

Saturday showed the start of the Team Tournament. I'll have a nice, sizable post of the armies I was able to snap shots of as my coverage goes on. My team had a showing of Salamanders, Iron Hands, Dark Angels and Space Wolves. We may not have done the best in the placements, but we only had one real goal, and that was to just get games in with good friends and have a good time. Hard to go wrong when that's your only real goal, eh? Late that night I got to hang out with some friends from Lansing MI who I didn't think we're coming and try Giordanos pizza for the first time.

Sunday brought the last two rounds of the Team Tournament and the end of a weekend I look forward to all year long. One that just never seems long enough. There are some changes coming for me in the hobby as a result of this weekend, both from a personal perspective as well as a commission-based one, and all are for the good. I can't wait to take everyone along for the ride with this blog!

To all the friends I don't see often enough; Brandon, Alex, Alex, Dave and Dave, Thomas, Chris, Rich, Neil, Josh and Jake, Jim, Damon and Joe...and hell, everyone else...I've got to get out to more of these, cause once a year just doesn't seem like enough to catch up with everyone.

Who else was there? Who had as much fun as I did?!

Posted by Miniature Tim at 9:16 AM