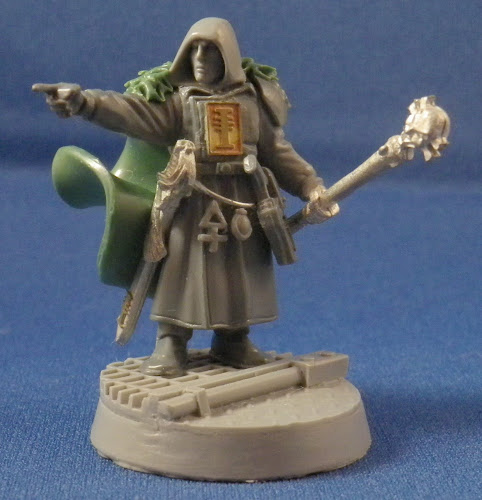 
I based him off the Tank Commander body from the Bane Blade kit, and worked from there. I shaved down the collar a bit, and used a hooded Wood Elf head to give me a potential Psychic Hood... That should tell you how long ago I started him. Considering how static the figure is, I really wanted to give a contrasting feeling of movement to him somehow, so I decided to sculpt a flowing cloak with a furred trim at the shoulders, whipping around him as if he was the calm in the storm. The cloak is currently not glued to him for painting purposes. 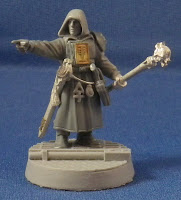 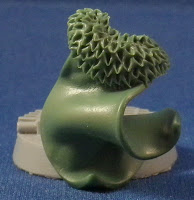 Next up was what to do to about his kit and equipment. I wanted an Inquisitor on the cusp of heresy. One who looks cemented in the Imperium in his basic clothing and kit, but a blurring of the line entering into him as well... Back when you could still Bitz order from GW, I would make random orders of pieces I just thought could be useful in the future... So I have a Commissar's saber and sash on one side of him and a standard issue, holstered pistol on the other. Inquisitorial markings adorn the scabbard of the saber, and the holster made from Forge World brass etch, as well as an armored plate on his chest. Then you begin to see his decent into the seduction of Xenos tech and artifice.

Using a Harlequin Shadowseer, I cannibalized his hand and staff to use for a force weapon, and strung a trophy chain from his scabbard to his holster, with an Eldar Spirit Stone and Dire Avenger rune dangling from it. Kind of handy now considering Inquisitor Valeria's kit, and I'm considering using him as a counts-as version of her. 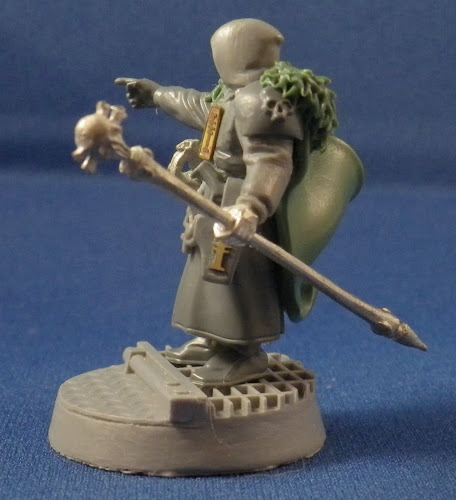 The base that I'll be using as a starting point for him comes from Dragon Forge in the swag bag from Adepticon 2010. I'll do a bit of converting to it to make it a little more unique, tell a subtle story, but not too much, I don't want to over complicate an already clean, well designed base.

Coming up I still need to do a bit of cleaning up on the cloak, and additional green stuff work to give him cuffs on the long coat, and some trim as well. I'm also going to add a rebreather to him, modified from the Cadian Command Squad box, to help hide some of those more Elvish features.

I'll finish the modeling this coming week while I'm on vacation, and be ready to prime when I get home on the 23rd. That'll give me a week to paint him. Will it be enough time? Who knows, but if I keep putting off entering a painting competition, I'll never do it.

And yes, you read right, I'll be on vacation starting Friday, and will be returning on the 23rd of July! I can't wait, and while I'll miss a couple updates for next week, (no internet where we're going), I'll have an update on this guy ready to post on Saturday when we return!