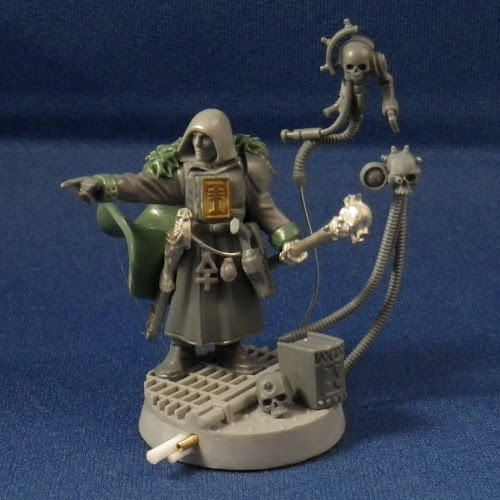 After a post from Ron at From the Warp about cleaning and prepping Resin Bases, it was fresh in my mind that I needed to pay special attention to this process. If I didn't, the entire miniature would get off on the wrong foot, from the ground up, literally! Luckily, Jeff at Dragon Forge has high quality standards and there was very little, if any, mold release on it to start with, and the flashing was virtually non-existent. So I cleaned up the resin base as best as I could, cleaning, filing, scraping and filling the slight gaps. The reason why the gaps still appear like they are there is because I filled them with Loctite Gel.

Done with the prep work, I dove into concepting a story. First, I wanted to break the footprint of the base itself to give it a little more of a scenic feel. Since it is an industrial base, I dug out some plastic rod and guitar string, drilled into the walls of the base and extended some piping and conduit on either side. Not too much, but a small touch. 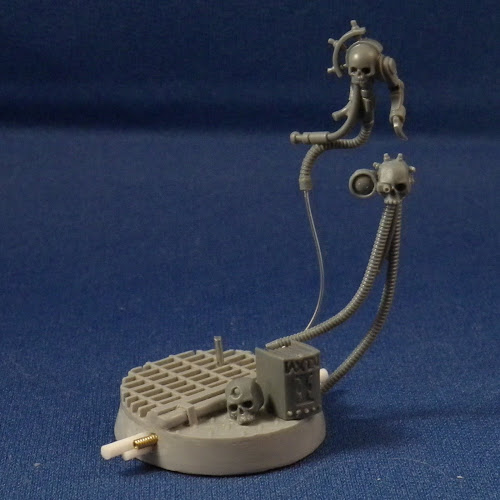 Then I grabbed one of the backpack ornaments from the new Grey Knight plastics, and trimmed the excess off, giving me a thick Inquisitorial tome that my character was rescuing. I placed this in the base, slightly breaking the top "border" as well to give me a larger scene. I found a skull with a bullet hole in it on a little piece of terrain in my Bitz box, trimmed the terrain features off of it carefully, earning myself a few new nicks in the process, and deposited the previous owner's skull next to the lost artifact.

Hmm... Still not enough... Height! I needed some height. Something to set off this lone figure from the rest. So, what's an Inquisitor without some Servo Skulls?

I grabbed one from the Grey Knights, and one from the Cadian Command box. The Cadian one had these long, flowing conduits already attached, so I cleaned him up and drilled a hole for the longest to slot into, next to the book, the last thing left from the Tome's previous owner, standing vigil still upon it's rediscovery. Not to be out done, my character brought his own pet with him. This skull from the Grey Knights box is a little more vicious looking, and little more of a challenge to pose as well since I didn't want him physically attached to the Inquisitor. Drilling another tiny hole into the base, I dug out my handy Floral Wire and created and armature to hold the Servo Skull in place, hovering dutifully at his master's shoulder. I'll paint the armature pure black to hopefully help it disappear as it's there to only hold up the skull, not be a part of it.

Pinning the Inquisitor to the base, I placed him off-center to give the scene some breathing room in it's composition and took a look. I liked it. Not too overdone, but still, the visual elements of a scene from a story are there. My height is right, and I've even created a visual triangle between the Inquisitor's head and the two skulls floating there. Now to finish the Inquisitor himself.

Keeping a comment from my previous post in mind, I trimmed the Cadian rebreather from it's cabling and tacked it to the figure's face so I could see if I liked it... I didn't, I hated it. Jonathan, thank you for your comment as you were completely right in that it obscured far too much of his face, competition miniature or not. With regards to the brass etch on his chest, I plan to make it more a part of his coat with some detail work with stitching done in the painting stages. 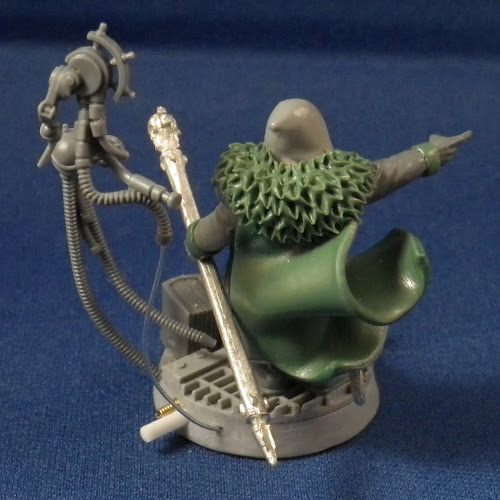 In the end, the only thing I changed about the Inquisitor was to add some cuffs to his coat with a little Green Stuff, detailing button holes with my needle tool after the GS cured for an hour or so.

The last step was to just go back with a fine tooth comb, and an extremely sharp scalpel hobby blade, to remove any last mold lines I found. 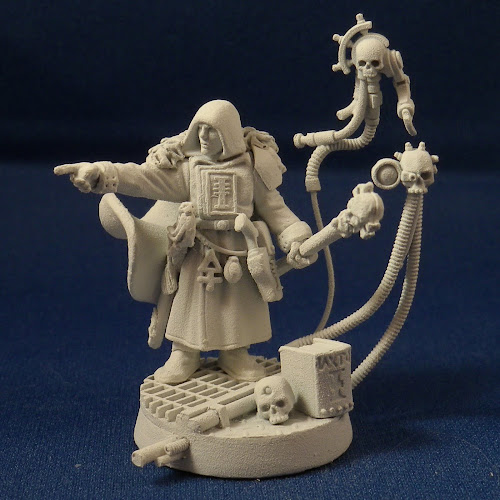 Here he is, primed in all his glory and ready for paint. I've got one week.

Posted by Miniature Tim at 8:25 PM