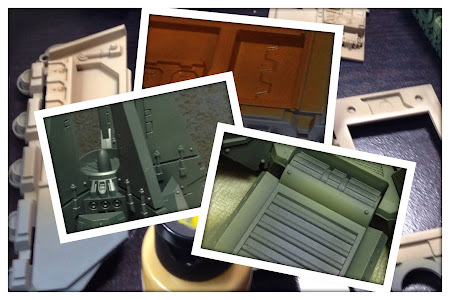 Okay, so I thought it would be time for painting progress shots…and of a sort, I suppose there are some in here. What has actually happened is that my hobby ADD got the better of me, and I started working on my only 2 vehicles in the 1000 points; a Rhino and a Drop Pod.

No, I didn't buy an Kharybdis Assault Claw. Those things are huge, expensive, and not appropriate for a codex-entry Drop Pod. I'm saving my money for other huge and expensive hobby purchases. I did, however, purchase a Heresy-Era Rhino to use with these guys.

Have I mentioned yet that I'm falling "in hate" with the pounds of Resin that is in this army?

Let's talk Drop Pod first, shall we? It'll be the easiest to cover, and will allow my ire for the resin Rhino kit to come through all the better later.

This is actually the first time I'd ever assembled a Drop Pod before. Shocking, I know. The one time I've used one previous, in my Centurions, I bought it from a friend already assembled and the doors were glued shut. Pretty much easy-mode from there. This time around, it was still easy-mode. See, this is a Drop Pod dedicated to a Dreadnought, so I decided to completely forego assembling the harnessing and interior of the Drop Pod aside from the Storm Bolder mounted to the roof.I also decided to not glue the doors shut this time since I was keeping the interior so minimal in it's detail. I figure it won't take that long to paint. The only other two things I did special was to shave off the Aquilas on the floor, this is a Heresy-Era Drop Pod after all, and I used some more of the wonderful brass etch from Forge World to give the outsides of the doors some heraldry.

Here it is with the Lurking Moss coat: 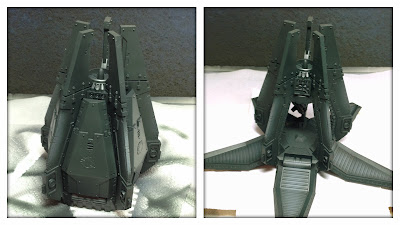 And here it is with the color modulation! 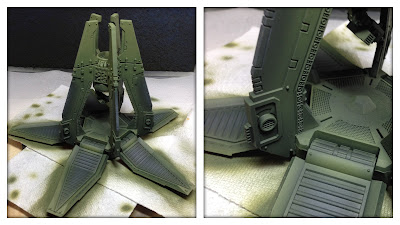 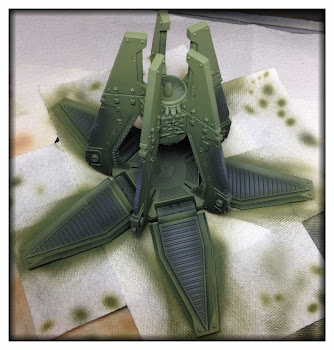 I've gotten everything done from this view. Next I'll be using frisket film to mask off these areas so I can paint the outside of the doors and the bottom without fear of screwing up what I've already done.

Now the Rhino…The Rhino I've been soaking for a while, so getting it out and giving it a nice short scrub was easy enough. However the trouble started as I began to actually clip the parts free of their resin sprues. Here's a tip: Don't clip the spruse at the actual piece. I did that and now have a chunk of resin missing from one of the sides. Ah well. I suppose I can call it battle damage and go from there. The rest clipped out fine enough, but I had to give it another scrubbing for good measure. I will have to warm the two side panels and bend them straight when I work on the final assembly as they warped a touch. 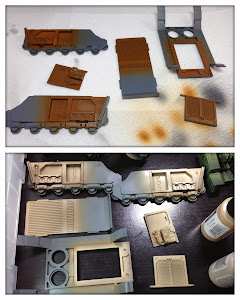 On the painting front, I decided to also paint the interior of the Rhino to help me practice with my airbrush. I started out with a darker, warm brown and brought it up to a more creamy bone color. 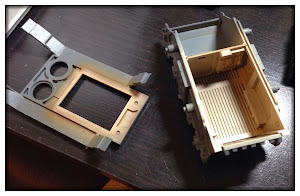 I'm definitely liking where this is going, and once I get the control panels painted up, I'll gloss coat it and try my hand at an oil wash for the first time.

Still plugging along! I know I mentioned more painting in progress shots, but I really needed to slog through these two models. But here's a teaser: 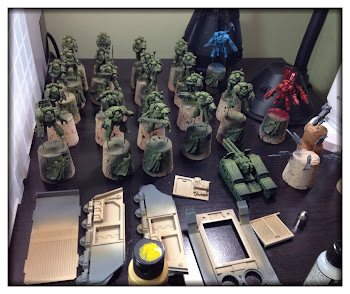