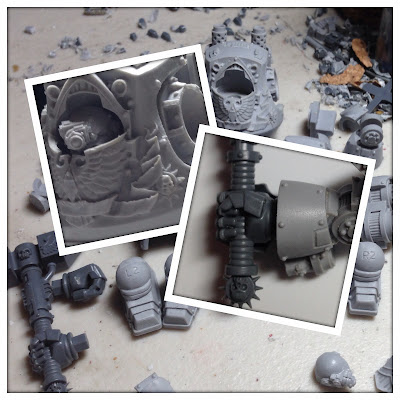 Yes, I'm well aware that a Contemptor Dreadnought and an Ironclad Dreadnought are two different things, but I am determined to make this 30K force work within the confines of both the current codex, and the Heresy-Era look. I want an Ironclad Dreadnought in my force, so that means conversion work. I mean c'mon, who doesn't want an AV 13 walker that's just meant to wade into the thick of it and beat face with something called a Seismic Hammer. Especially for Salamanders!

Of course, in true Miniature Tim fashion, I have to make this hard on myself and convert something as intricate as a Relic Contemptor with less than a month until Adepticon.

Remember me mentioning that I hadn't assembled a Drop Pod until this army? Well, the same can be said for a Contemptor Dreadnought as well. Mind you, I've owned both a Relic and a standard version for a year now and haven't assembled either until now. This should neither surprise, shock, or be unfamiliar to any of you. We all have a back log of resin crack in our "Closet of Doom™" (Trademark Mordian 7th). If you say you don't, you're either lying or in denial. 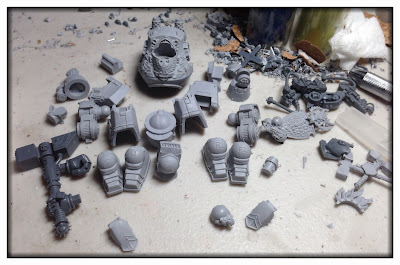 Something I've always been very happy with about this kit is the versatility in it's poses that you can achieve because of how the model is engineered and cast. So many ball joints and so many options! Of course, that also was initially a little intimidating…so many options, how do you choose just one? Well the good news is that I had an idea about this one already. Since he is going to be representing an Ironclad, armed with a CCW and a Seismic Hammer, I wanted him holding a Dreadnought-sized Thunder Hammer and Storm Shield! I see this as a nod to perhaps the war gear he had when he was in the Fire Drakes, Vulkan's personal guard.

Those of you familiar with my Chaplain Dreadnought from my Centurions will remember I converted a Heavy Plasma Pistol and Dreadnought-sized Crozius for him so he could continue to use war gear familiar to him even interred in a sarcophagus. 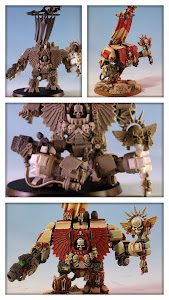 I quickly raided my Grey Knights Dreadknight kit for a Doom Fist and the Daemon Hammer. So many folks have given their Contemptors the sword from that kit, but you don't really see the hammer being used all that much. Considering the load-out of this Dread, the hammer works great for me.

After cleaning up the parts and pieces, I set to work solidifying the pose for this beast. I drilled down into the base I created for it, and dry-pinned the feet into it to give me a stable platform to build from. I wanted him bracing against an incoming hit so one leg is up on the rock while the other is back to provide stability. 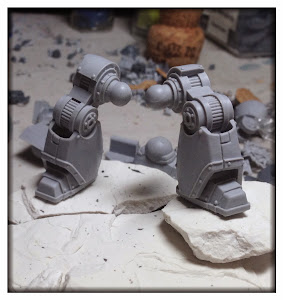 Next I ran a pin through the entire waist, pinning it to the pelvis, and also providing a pin into the main torso. A little glue and green stuff combo, and this was in place. 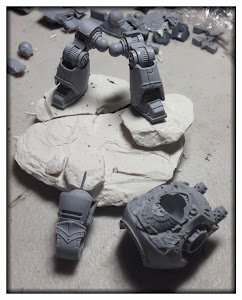 The torso was posed to have him leaning into the anticipated impact on his shield, and I used the head that comes with the missile launchers for Contemptors as I really like the targeting recital on it considering the chapter. 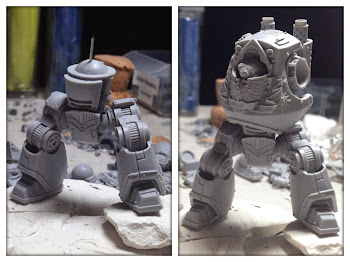 Finally I worked on the two arms. The first will be posed back and down, holding tightly to his Thunder Hammer so that once the hit is absorbed on his Shield, he can retaliate with a massive impact of the Hammer. 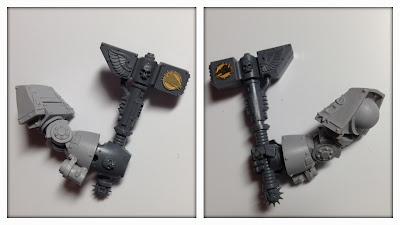 The second is curled tightly into a bracing position as this will be the arm the Storm Shield is mounted to. You'll notice I used some of the arm plates from the Blood Angels Dreadnought kit as armor extensions to help the hands blend into the existing arms better. This is not my idea, but I liked it when I saw it, so I used it here. You'll also see plenty of brass-etch used judiciously around the model and on the hammer. I've used more brass-etch in this small force than I've ever used before!! 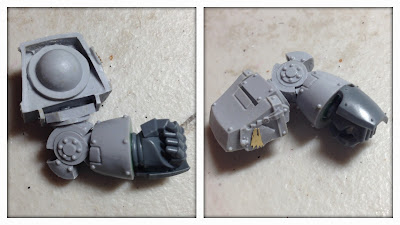 That's where it stands for now! Part 2 will encompass the task of creating a Storm Shield for a Contemptor from scratch, as well as a sculpting surprise!

Why do I do this to myself again?

Posted by Miniature Tim at 8:55 AM