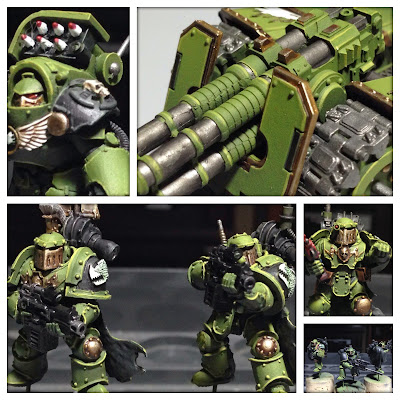 Dear Lord in Heaven I'm tired. I stopped painting last night around 12:30 in the morning to snap some pictures of what I've got done so far. Like I said, if I don't just grab pictures when I can, I'll never have a log of this project!

So far I've got the tactical squad, recon squad, the Tartaros Terminators, the Thunderfire and it's gunner and the Drop Pod all ready for a gloss coat and pin/oil wash.

On to the pictures!!!

Let's start with the Drop Pod and Thunderfire, shall we? 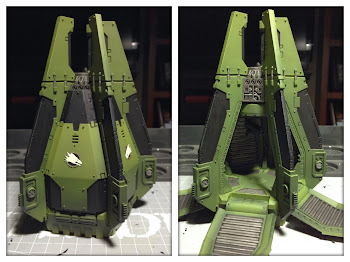 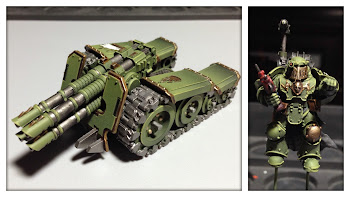 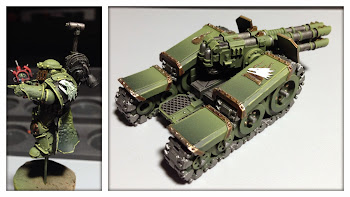 I'm very pleased with how the cannon and gunner have come out so far. The drop pod...well, it's at an acceptable point. Could I detail it out even further? Sure I could. Will I? Perhaps in the future, but it's to the point that I'm not ashamed to use it. I'm positive it'll look even better after the pin wash. 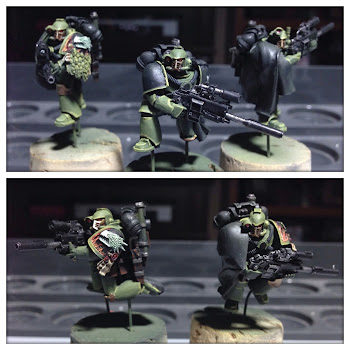 The Recon Squad turned out well. While they are of June sneaky variety, I couldn't resist giving them brass faceplates. I mean come on, how sneaky can you really be in powered armor anyway? 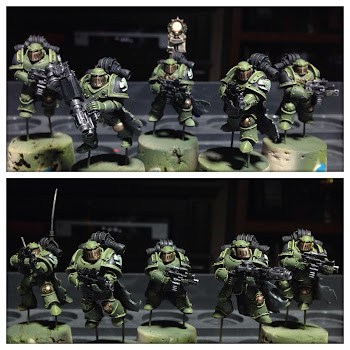 The Tactical Squad has their cloaks on finally, yay!! And no, I'm not really going to show all of them simply because they look a touch bland until I get the wash on them. Once that happens, the scales will really pop. You can see below what I mean on the squad sergeant and the comms officer. Originally I was only going to have the sergeant have the brass faceplate, but it set off the color so well, I had to do it to the whole squad, and then pretty much everyone with a helmet! 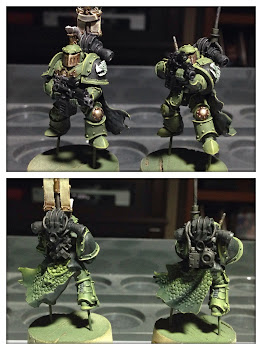 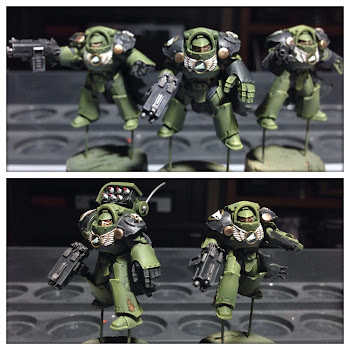 Yep, they have their own cloaks as well. These guys I'm okay with. I want to do more to them once I have some more time, like sculpt some chains to attach their cloaks with and really go to town on some freehand flames, weathering and details. Darn you time constraints, darn you!!

I may just have to break my informal "no posting on the weekends" rule so I can keep this log moving!

Posted by Miniature Tim at 9:10 AM