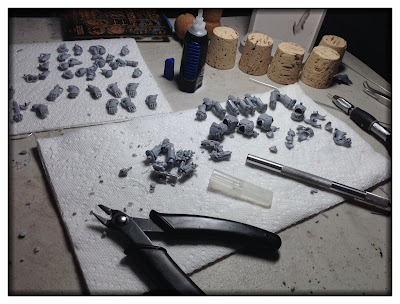 Apparently, I'm a more prolific blogger when I'm under the gun with a deadline looming rather than when I just meander around projects in my spare time. I've actually taken well over 100 pictures of in-progress shots of the Salamanders coming together, both from a modeling perspective and a painting one.

This time, we've got a squad of 5 Tartaros Terminators on deck!

By the way? Here's a little tip for cleaning the resin bits: Do not clip them from the resin sprues before soaking!! Giving them a good brushing takes literally twice as long if you do that. This PSA has been brought to you by the OCH (Organization of Cramped Hands).

First thing I ended up doing, after massaging feeling back into my hands, was to organize and separate out all the bits I was going to be using for these. I actually have 10 Tartaros Pattern Terminators, but for this initial build, I'm only using 5, so I cherry-picked the parts I wanted for them. Originally I was going to build these as TH/SS Terminators, but I switched my list around to be more of a support-oriented base, so ranged Terminators they became. 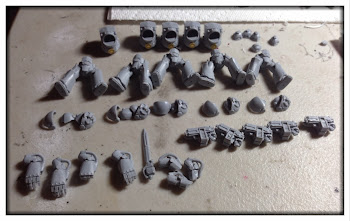 I also have a good amount of Salamanders Brass-Etch that I bought from Forge World to use on the army. Specifically, I wanted it for their shoulder pads and the vehicles of the army. Since these are supposed to be Heresy-Era Marines, I felt the need to take off the Crux Terminatus from the chest, and replace it with this sweet little circle of brass etch that showcases the legion symbol. Unfortunately, I would later realize that without some extremely careful carving, I would have to leave the much larger Crux Terminatus on the left shoulder, as I didn't buy the Heresy versions of the armor. Ah well. I still like the chest better with the Salamanders symbol in the center. 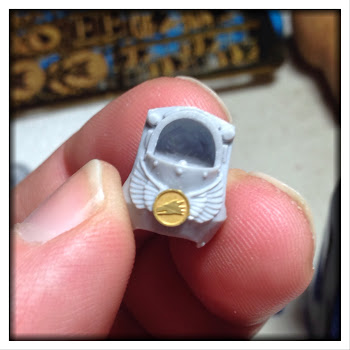 One challenge I had to overcome was that I am arming one of them with a Cyclone Missile Launcher. Easy-mode would have been to order one of these by Secret Weapon Miniatures. Unfortunately, I didn't do that. What I did do was butcher a Contemptor Dread's Missile Launcher. By only using half of it, with the cowling as well, it gave me a period-correct look at least, and I can use the other half for another launcher down the road. I just wish I didn't butcher the Dread's launcher before I looked for an alternative. What I also decided to do was build a bit of a comms style antenna into the exposed side so that it didn't look quite so out of place. 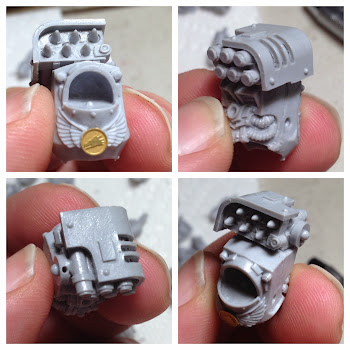 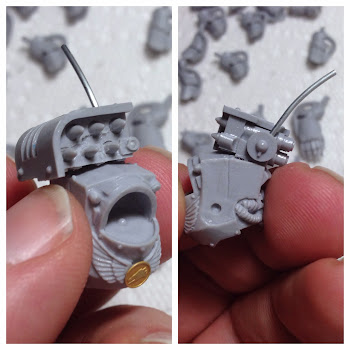 And here they are in all their glory!

You can see in some of the closer shots that the brass etch legion symbols didn't quite conform to the shoulder pads very well, but I'm actually okay with that. It gives them a bit of a raised look similar to the Crux Terminatus on the opposite shoulder, so it doesn't look too out of place. 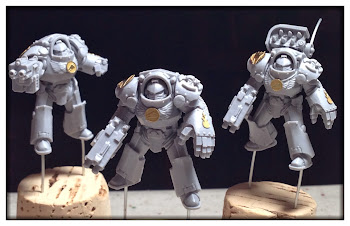 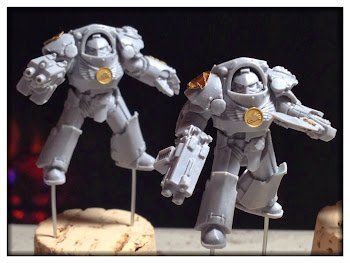 Here are a few shots of them with the initial bottom coat of Minitaire Lurking Moss on them. The lighting's a tad off due to the fact that I'm literally snapping shots with my iPhone as I work so as not to miss any steps, but you get the point. I'll dig out the light booth when I finish things to take proper pictures. 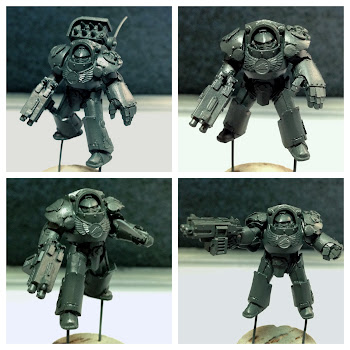 Maybe I'll bring the Techmarine and Thunderfire Conversion up next…

Posted by Miniature Tim at 8:56 AM