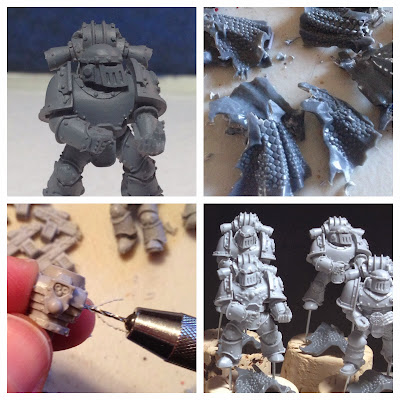 When we last left our heroes, they were soaking in a tub of water with an excess of degreasing soap added to it. With the Recon Marines built and pinned to cork stoppers for easier painting, and the Dark Elf Corsairs bought to pillage cloaks from, it was time to give these guys a quick scrub and rinse so they could join the budding 1000 point force.

Why in God's green earth did I have to buy an entirely resin army again?!?!

Oh yeah, that's right...because I love to pin every thing together. It's a joyous pastime that I just can't seem to get enough of... 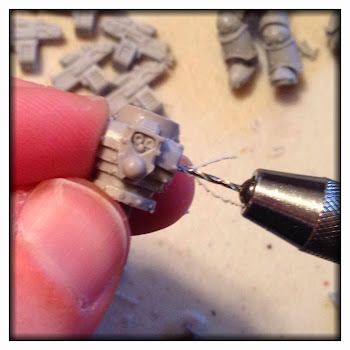 Right. And if you believe that, I've got a bridge to sell you as well.

I seem to remember that I had some oddly delusional thought that I wouldn't have to do this to all my figures. That has to be the reason I talked myself into an entire army made of Forge World. No man in his right mind would enjoy this. Of course, it's not the first time I've done it...I pinned everything together with my Centurions, and I had a blast modeling that army. Maybe I'm a bit delusional after all. Ah well. 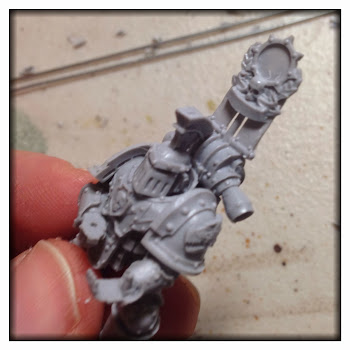 I also purchased the MkIII command pack. The first one that didn't come with a banner, but did come with sergeant and comms upgrades. The comms upgrades are simple, and easy to use with just a different helmet and comms backpack. The sergeant upgrade, however, is a crested helmet and a Romanesque back banner that is nicely understated. Nicely understated, and a pain in the tail to affix to the backpack. I ended up drilling slightly down into the backpack and pinning the banner into it using its own resin pole. It seats nicely, it was just a pain in the tail. 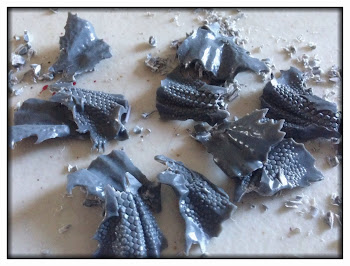 The cloaks, quite frankly, were a source of frustration for me. Since I wanted to airbrush the figures in the most economical way, I figured I would shape the cloaks to slip up and under the backpacks after I painted them separately from the figure. Holy crap, was this a bigger headache to figure out than I originally thought it would be. After the first failed attempt, I nearly gave up on using them. However, through a good amount of trial and error, and not just a few bloody fingertips, I shaped the cloaks with a deep dip in the center that would allow me to slide them under the backpacks. 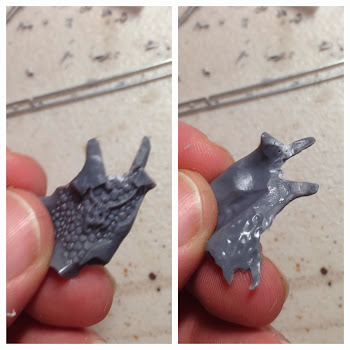 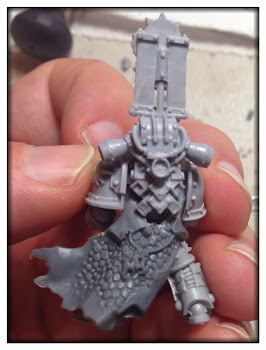 I also continued to pin all the weapons to cork stoppers so that I could paint the figures easier, and glue the weapons in after painting. 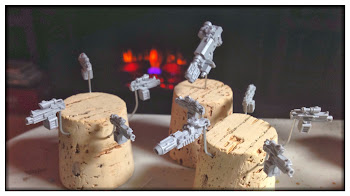 Finally, I cranked up the compressor and broke out the new Badger Patriot 105 I got at my local Michael's with a huge coupon, and primed a batch with Vallejo Air Base Grey. 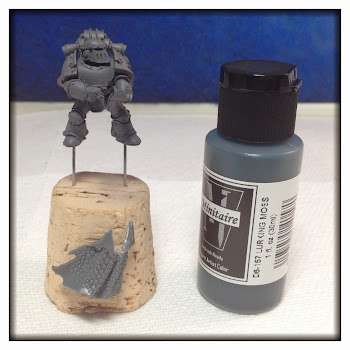 With how fast that went I then took my Minitaire paints and chose Lurking moss as the first! and darkest coat of green and gave them a good coat, 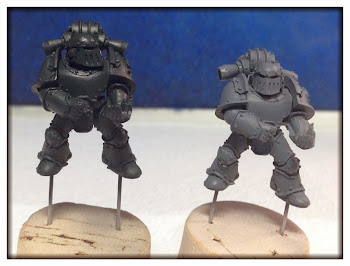 I've got to say, I'm highly impressed with the badger line of products for both the quality and the price. Now I'll admit my exposure to multiple lines of airbrush manufacturers is limited, so take my praise with that in mind, but I'm not the only one think this either.

So far so good folks. Keep an eye out for the Tartaros Terminators next!

Posted by Miniature Tim at 9:04 AM