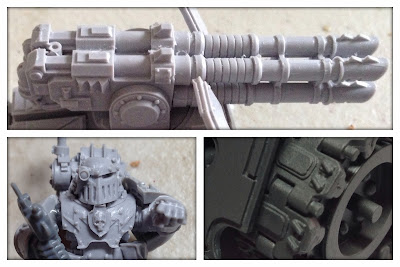 "Wait…Tim, I thought you were just using the Rapier Laser Destroyer for this model? What do you mean 'Conversion'?"

Yeah, I thought that too. Until I pulled it out of it's soap-laden bath only to discover that I was missing an entire side of track. And not only did I completely miss this glaring obstacle, I bought the dang thing over a year ago, and have no hope in hell of trying to make a claim on it with Forge World. I'm not sure if I lost the piece, or never had it to begin with it was so long ago. So what's a guy to do?

Well this guy decides to say !@#% it, and make his own tracks. 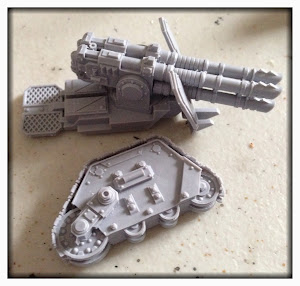 Apparently I've gotten far too used to just building a kit straight out of the box lately, and actually contemplated either ordering another model from Forge World, or going out and buying the standard Thunderfire Cannon from GW to pilfer it's tracks. It actually took my wife looking at me like I was stupid and asking why I couldn't just build my own with all the parts I already own. I felt ashamed to call myself a hobbyist at that point and started digging through everything that was available to me. 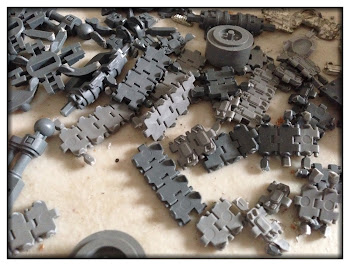 Originally I was going to build legs on it ala the Tarantula, using a bunch of Sentinel kits I have. I started working on that, but soon realized the footprint would be huge compared to what it should be, and scrapped the idea. After a quick scan of my drawers of bits and kits, I found my old Chimeras and Hellhounds that were still unassembled. The old ones that all the tracks were in a million pieces and the track wheels were all separate. You remember those, right? They were the bane of many an Imperial Guard player. Today though, they were to be my salvation. I knew I kept them for a reason. 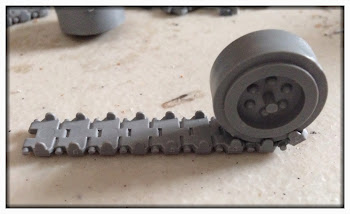 So I grabbed a ton of track pieces and wheels, and went to work. I needed quite a few of the single track pieces, and a few of the mid-length ones. I started with securing the front wheel to the track, and beginning the curved portion, wrapping that up and around before adding 3 more wheels to each side. 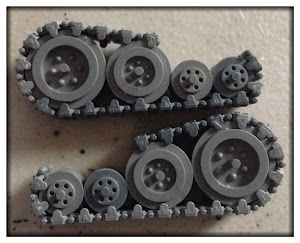 It turns out I didn't quite measure correctly, as the tracks didn't meet up perfectly no matter the combination of sizes I used. The solution was to actually trim a single piece a but, and slip it in the middle, while grabbing some of the tread guards and using those to cover the mis-matched sizes. Is it perfect? No, but it works and doesn't look half bad so I'm happy. 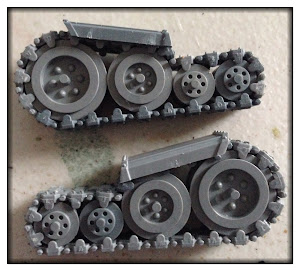 I needed a bit of a platform to affix the tracks to, so I added some plasticard framing to the core of the assembly. 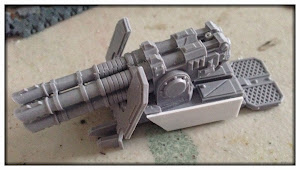 You can also see that I added the shorter rear track guards as well. 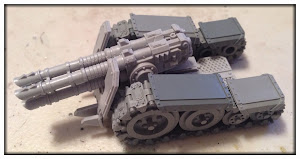 I'll be honest. I was a bit unsatisfied with this solution at first. Then I primed and gave the first coat of Lurking Moss with my Patriot 105 airbrush. You can also see I added some brass etch details to the top of the front track guards. 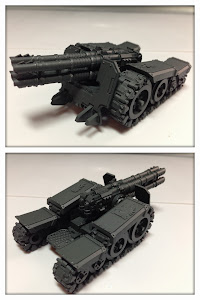 I also worked on a gunner for the Cannon, as it just seemed lonely without him. He's not physically manning the gun like in the original kit, but I did carefully carve out his right hand and give him a new one holding an Auspex. I figure that he's remotely controlling the Thunderfire from the Auspex. I also pulled the arm away form the body slightly with some pinning wire and green stuffed in some new soft armor so that his arm is in a better position. More on him as he goes through paint. 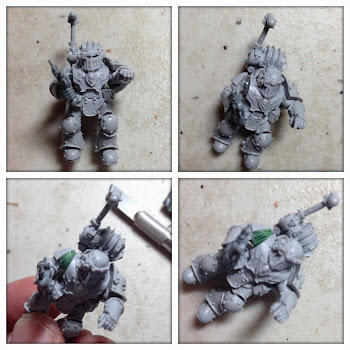 What started out as a disappointment ended up turning into a fun little conversion! It also leaves the option open to buying another Rapier platform and having another Heresy-style Thunderfire Cannon.