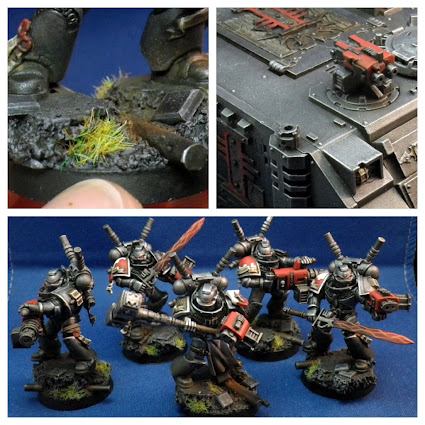 The closer Adepticon gets, the closer the Grey Knights move towards completion! This time around, the Interceptors and the singular tank in the army is complete.

If a Rhino can really be called a 'tank'. A mobile pillbox, maybe?

Wait, no, that's a Chimera.

Ah well, on to the update! 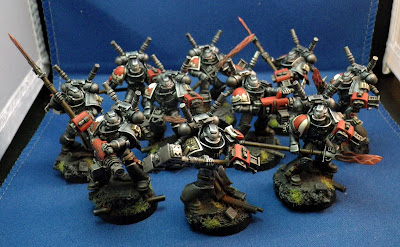 Now, if you're thinking to yourself, "Interceptors are just another Strike Squad, with funny-looking backpacks", then you'd be correct! 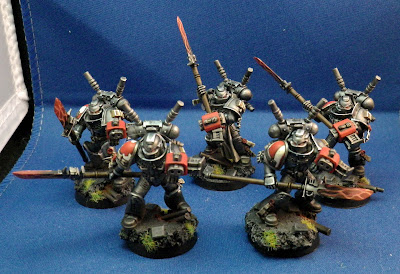 In all seriousness though, there really was no change in painting methods between this squad and the Strike Squad. When basing, however, I did attempt to go heavier on the weathering powders on the lower parts of the greaves and feet in order to retain more of the effect after sealing it with Dull Cote. While more successful this time around, they are still losing a decent amount of it. This continued to perplex me as when I used weathering powders on my Centurions, much more of the pigment stuck around than when I use it on the Grey knights. 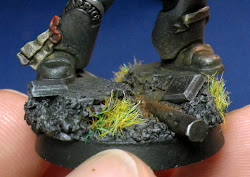 When finishing my Rhino, however, I may have figured out a little piece of this puzzle. More on that, later.

The Rhino, having been based with the Tamiya Light Gunmetal Spray, was essentially ready for detail work as soon as it dried. Once I was done with blocking in the basic colors, I went back and washed them, added some limited highlights, and was ready for the weathering powders! I dug out my Soot, Weathered Mud and Dark Rust colors and put powder to vehicle. 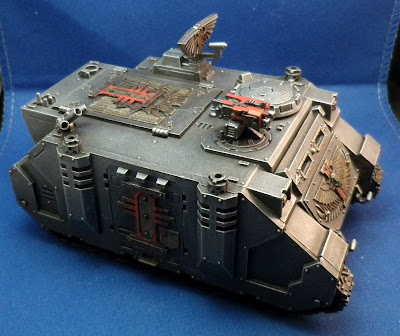 My enthusiasm was quickly dashed, however, as the powders barely stuck. And I do mean barely. I had to use quite a bit more friction to get them to have any true noticeable effect that I normally am used to. Unfortunately in that process of frustration for me, I went overboard and over-pigmented my tank. When I was finished, the overall appearance was way too dark and dulled. Including the detail work I put into the tank. 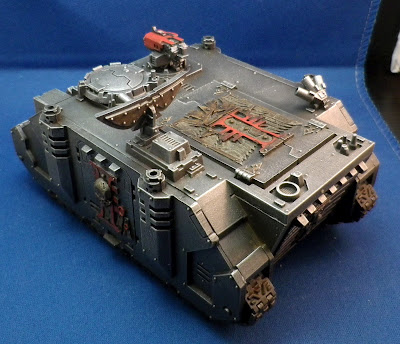 Refusing to just say "Good Enough" and give up, I applied Dull Cote to the Rhino, let it dry, and set about fixing it. I did three successive layers of drybrush, Boltgun then Chainmail then Mithril, very VERY carefully and lightly, on the top 2/3rds of the vehicle, working my way up. Boltgun being used the most and Mithril being used the least. Then I went in and blended the reds back to some brighter notes. Overall the effect worked great and the Rhino is much brighter and goes with the army better than before I fixed it. 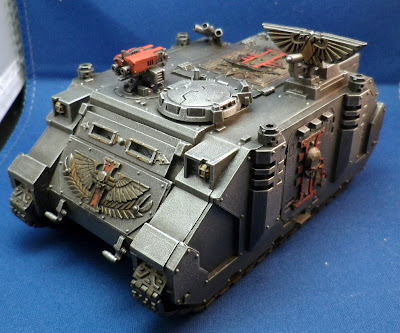 While I don't have pictures of the Rhino before I fixed it to share, I can share my piece of the puzzle I believe I figured out from before. My theory is that the weathering powders have trouble affixing themselves to metallic paints. It's the most simple reason I can think of to why they worked wonderfully on my Centurions and are a pain on the Grey Knights. I might do some experiments in the future to test this on other metallic paints, but it is food for thought.

3 weeks until Adepticon! Anyone going feeling the pressure yet?