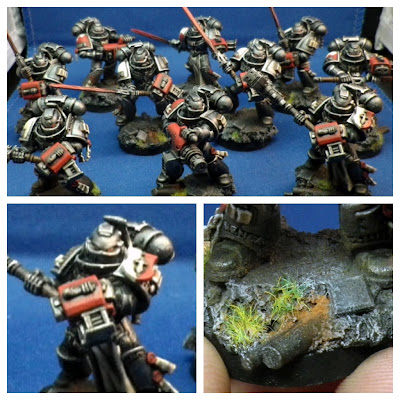 I know it's been a while since I've posted about any progress on the Grey Knights for Adepticon, but while I may have been silent on them, I have not been idle! In fact, the Rhino is now 95% done, the Interceptor squad is about 75% done, and the three Dreadnoughts all have their steel and armor complete.

I've already posted paint schemes on the Armor, Reds and Whites/Cloth, as well as the tutorial on the Force Weapons. Now we'll dive into the finishing touches.

Early on, I took a bit of a shortcut that I don't normally do, and I affixed the figures to their bases before priming. I typically design the bases, prime and paint them separate from the miniatures, then bring them together after everything has been painted. This time, convenience won out. The bases, designed in an urban rubble theme, are based with Charidon Granite and the pipes based Boltgun Metal. After that, 1 wash of Badab Black goes over the whole base. Once dry, a second wash of Badab Black went over just the ballast and the pipes, as I wanted the concrete to be a bit lighter than the rest. After that, I mixed Charidon Granite with Menoth White Highlight (yes, the two lines do mix well together, and I expect that to be even more so with the new Citadel range), in a 1:1 ratio for an initial drybrush over everything but the pipes. After that dried, I mixed a 1:4 ratio of the Granite and White Highlight to drybrush a final extreme highlight.

Once that process was done and dry, I came back the next day and chose three weathering powders from my selection of twelve. One was a soot, to dull the highlights on the base as well as the legs on the armor, one was a rust color for the piping, and the last was a mud brown for just general weathering and muck.

The soot I used sparingly. Just enough to dull some of the highlights in general to give that illusion of dust. I pushed a little on the feet and bottoms of the legs on the marines just to tie them in a bit to this effect on the bases. If it's concrete dust, it'll get on whatever walks through it.

The rust went on very carefully to the pipes and some, very little, of the ballast surrounding the pipes only! Rust only bleeds so far. Since I had the figures already glued down to the bases, I had to be carefully. Grey Knight armor may get dirty, but never rusty!

The mud colored powder was used sparingly as well, for the main fact that I didn't want to cover up the detail work of the other two powders. I also didn't want to go overboard. I used it mostly in the realm of the ballast, with touches of it on the concrete. I also brought just a bit up on the legs of the Grey Knights to finish bringing them together with their bases. 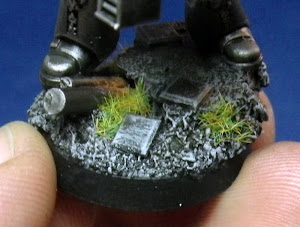 The final touch is a little static grass used exceedingly sparingly. Just to give that impression on that little weed or three that always seems to find a way to grow in concrete. 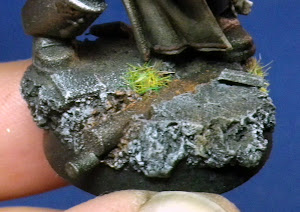 Unfortunately, sealing the figures with Testors Dullcote either blew away some of the dust or rendered it nonexistent, Looks like I need to use a bit more of the soot and mud dusts to pull off the effects I want. Not all of it disappeared though! The rust on the pipes is perfect, and some areas of mud and soot stayed. I should have remembered a series of posts at From The Warp on this topic and been a bit more heavy-handed with those powders. 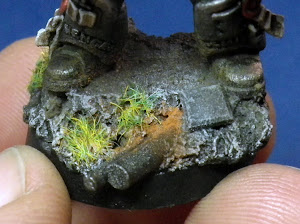 There you have it! When I said I was going to go over the finishing touches, I meant it. It always pays off to put just as much attention to the bases your figures sit on as you do the figures themselves. This is the environment they live in, tie them into it! Ron over at From The Warp also has a great article on just how important this topic is here: Hobby Focus, Model and Environment I highly advise you shoot on over there and soak up his take on this subject as well.

How is everyone else's projects for Adepticon coming along?

Posted by Miniature Tim at 7:39 AM