40-ish days until Adepticon and it feels like I am still in second gear with my Grey Knights. While I'm about 95% done with the first 10 infantry models, I still have 18 more, and then the Dreadnoughts and the Rhino. Yes, of course I have plenty of time, and plan to have it all finished by the end of the month. Vehicles tend to be a bit of a stumbling block of rme at times, though, and that singular Rhino could have been a bit of a troublemaker for me...

COULD have been. Key word here, Could.

I'm sorry, that pause was me staying silent while the Purist Painting Police were banging on my door. Yes, I admit I went looking for a shortcut, so sue me. With some of the projects I've got on my table, both miniature-related and normal graphic design, I needed a shortcut to help lighten the load.

Considering that GW no longer makes their Boltgun Metal spray, and I was looking for a way to base the Rhino in one go, I went to a local hobby store and found this; Tamiya Color For Plastics, Light Gunmetal.

Most know the name Tamiya from the wide variety of products they put out from airbrush paints, pigments and even their primer that I included in my "A Matter of Opinion" article on primers. When I found this little gem, and yes, the can is on the small side so let's not think cheap here either, I figured this was too good to be true. Regardless of that initial reaction, I bought a can and brought it home. Yesterday I when the humidity and temperatures were decent for using a spray, I gave it a shake and tried it on a spare vehicle accessory sprue. Take a look.

Ignoring the bare plastic where I twisted the pieces off the sprue, look at the coverage and preservation of detail. The nozzle has a very nice spread, and it goes on very easily, with little wasted overspray. 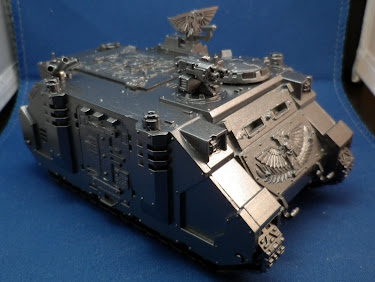 Now, on to the Rhino. The Rhino with Forge World doors, top door and front plate. Now you see why I tested it on a spare sprue first! 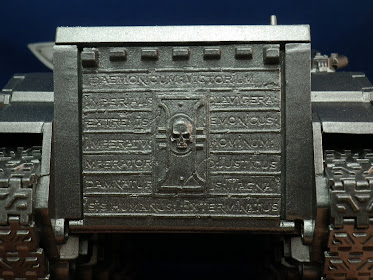 I was beyond impressed. Even in the ultra-fine resin details in the doors came out wonderfully, with no small details obscured. The only negative I can say is that for color named "Light Gunmetal", it's a touch on the dark side, maybe a shade darker than GW's own Boltgun Metal. 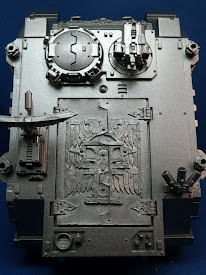 Will I spray the entire army with this now? No. I've already started the infantry models by hand and I like them that way. I won't even spray the dreadnoughts with this as I want them to match closely with the infantry. However as a nice shortcut for the base coat to the Rhino, I'll take it.

So my little experiment and risk paid off this time. Thank God. When was the last time you took a risk on a new primer, paint brand or pigment powder? We're you happy or dissatisfied with the result?

Posted by Miniature Tim at 8:01 AM