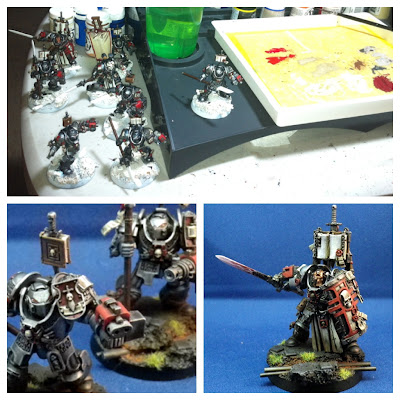 Have I mentioned how much I hate pushing projects down to the wire like this? Don't get me wrong, I'm very happy with how these last 8 figures came out on the whole. I just wish I had been painting them back in December as I should have been.

Ah well, no use crying about it now. A weekend with little to no sleep in order to have gotten these done isn't going to hurt. Besides, I can sleep when I'm dead, right? 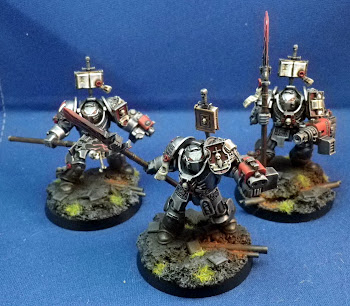 The Paladins, and their big brother Draigo, round out the final models for my Grey Knights army I'm taking to Adepticon this week. I've mentioned in the past just how much I enjoy the Grey Knight plastics, haven't I? Well if I haven't, I'm doing so now. At least, the Terminator models. The standard power armor plastics, while very highly detailed, are a bit on the inflexible side when it comes to variances of posing options. The Terminator plastics on the other hand, are very nice in terms of being able to vary their appearance from one to the next. Heck, if I hadn't built my Draigo out if plastic parts, I wouldn't have mirrored the legs and tabard combo from the Apothecary even. 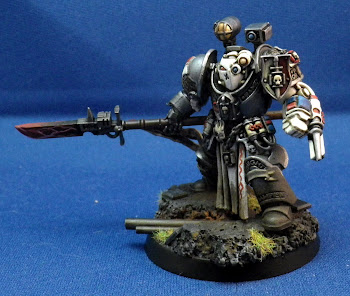 Speaking of the apothecary, I truly did enjoy painting him. I've always liked the white helmet and white arm combination for a Terminator Apothecary, so I couldn't resist doing it here either. I'm just thrilled that having bought 3 boxes of these guys gives me the bitz to build two more with these parts. 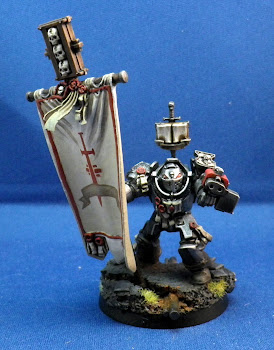 I'd like to get more done on the Brotherhood Banner, in terms of freehand, but that may wait until later, considering I leave in 3 days for the trip. I'm almost okay with it, though, as I'm thinking of selling this army at some point this year, and I could then personalize the banner to whomever buys the force. 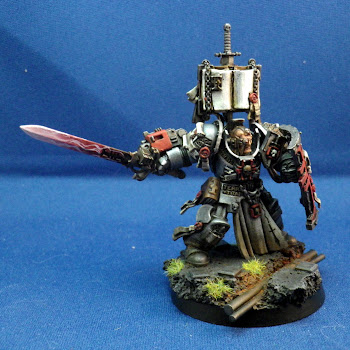 I tried something a little different with Draigo's sword to make him stand out just a touch more. Instead of the black to red blend with effects, I went for a black to red to white blend, with white electricity effects. The jury's still out on that experiment for me. I like it, don't get me wrong, just not sure how much I like it. Overall, I'm very pleased with how he turned out though. 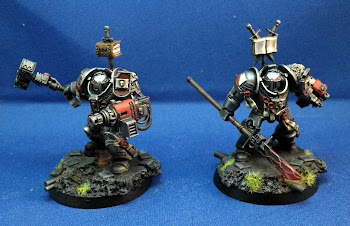 I won't bore you with color schemes for the armor or other bits and bobs on them, as I've gone through them all in earlier posts for the rest of the force. Though if you do have any questions on any part, don't hesitate to ask! I'm happy to share.

2 days folks...2 days. Anyone going to be losing sleep these next few nights in a mad dash for the finish before the games begin up in Chicago?

Posted by Miniature Tim at 8:06 AM