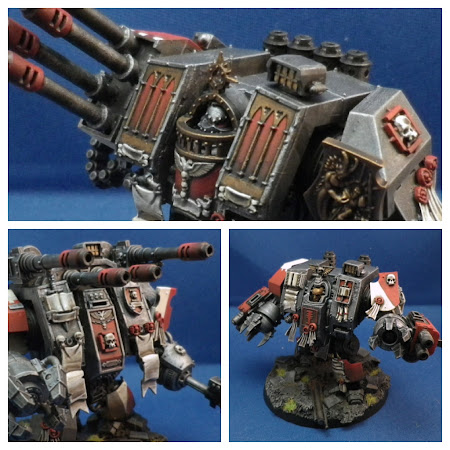 As of 3 am this past Sunday, the three Dreadnoughts in my Grey Knights force were completed. I was tired, and darn near falling asleep in my static grass as I put the finishing touches on, but they are done! I can honestly say that it was an interesting experience batch painting multiple Dreadnoughts at once. 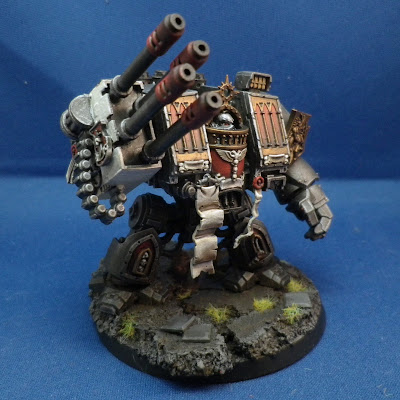 Why not fun? Because I enjoy taking my time with this type of model, giving it the attention to detail it deserves. Batch painting them gave me a feeling like I was just painting another squad of marines, and not towering, entombed and ancient warriors of the 41st Millennium. Unfortunately, taking my time with these three was a luxury I couldn't afford with my current time frame. Yes, I know that's my fault, and mine alone, for putting them off for so long. What's done is done however, and while it may not have been as enjoyable as I had wished it to be, it was still a rewarding feeling to have them all done at the same time. I like the way they turned out, and will not be ashamed to field them on the table. 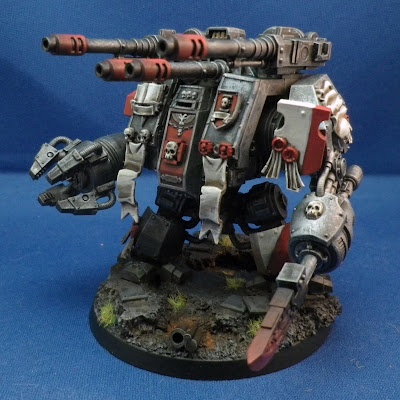 I followed the same formula for their main metallics as I did with their marine brethren, except for the highlighting of the armor. After the Badab Black wash, and before the 'bluing' of the armor, I gave them a drybrush with Boltgun, then a selective drybrush with Chainmail. Then came the thinned Asurmen Blue wash on the main armor plates. I also only 'blued' the armor, and not the mechanics or exhaust. This gave a nice, subtle contrast between the armor and the guts of the Dreadnought. The reds and "whites" were also treated the same in terms of color mix and formula, and I threw in a few gold and bronze accents for flavor. 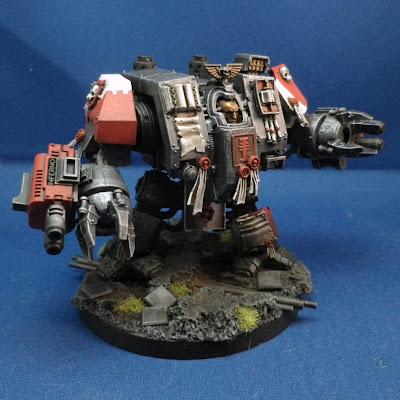 As I finished with the weathering powders along the lower halves of the models, as well as the exhaust stacks, I noticed that I was weathering both the metallics and some reds and whites along the leg plates. I figured this would be an excellent opportunity to see just how different the powders would react on the two different painted surfaces. 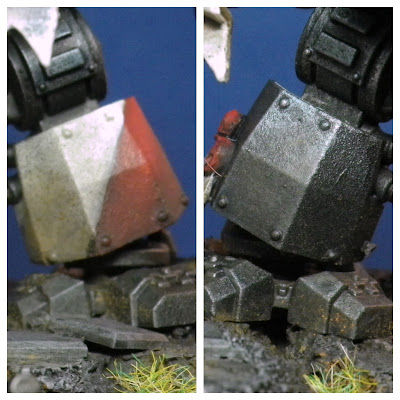 Turns out my earlier theory on weathering powders having a harder time "bonding" to metallic paints may have some weight to it. The legs plates were weathered with the same amount of pigment, but compare the impact the powders still have on the white and red legplates versus the metallic ones. While I lost some pigment still on the white and red armor plates, it was no where near the amount I lost on the metallic ones. Definitely food for thought and it may warrant further experimentation on the subject.

I would love to go back in and do some detail work on the heraldic shields and shoulders, but only if time allows. And right now, time doesn't allow. Aside for that, let me know you think!

Posted by Miniature Tim at 7:51 AM