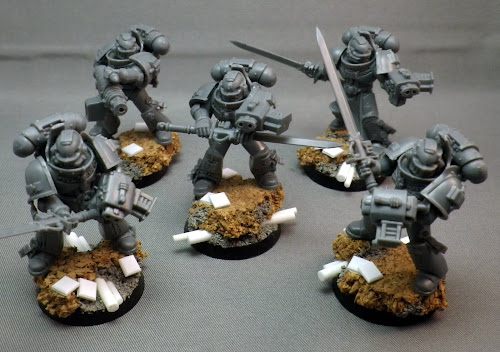 As most of you know, I'm putting together a Grey Knights force for the Tournament Circuit next year. One of the best things about this army is that I get to play with the newest, as well as some of the most advanced, plastic kits GW has released to-date. As an avid modeler, you would think I'd be excited to dive into these detail-rich new plastics.

So why do I feel like I'm just going through the motions?

Let me start off with saying that new new kits are amazing. GW's quality and detail started soaring with the 'new' Black Templar upgrade sprues, and they just kept getting better as the years have gone on. The sheer amount of detail in the Dark Eldar and the Grey Knight plastics and figures is phenomenal! So why am I complaining?

The problem I have is two-fold.

My issues started the other night after I finished putting together my Grey Knight Strike Squad. The sprues came with a good amount of bling to place where you want, dynamic purity seals, reliquaries, etc. The problem was that the models already had so much plastic bling on them already, there wasn't any room to tastefully place any of the extra stuff.

Yes,, I know I wanted to put together an paint up an army that was on the lighter side of converting and modeling as compared to my Centurions...and yes, the Grey Knights fit this bill perfectly. But that hobbyist itch of mine wanted to convert SOMETHING!! 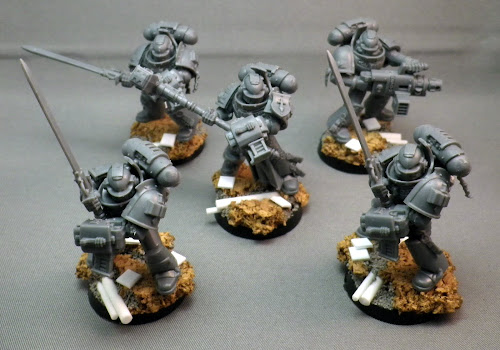 Then there was the second part of the problem is that even though I wanted to convert something, when the squad was assembled and done and I looked over everything...I was happy with them. It was a strange sort of satisfaction at the completion of a squad that I didn't have to convert to look good to me, that I've never felt before. Heck, I broke one of my personal little rules of "going beyond tabletop quality". I didn't even do a head swap as everything came out of one box! I've NEVER done that.

In the end, I've determined that I love to hate these kits...in the best way possible. I love that I'll have a great looking force on the table with minimal effort. I hate that I didn't do anything to put any sort of personal touch to the infantry models whatsoever. I love the sheer amount of detail and options in these kits that will make my Bitz box stuffed with awesome tidbits for future projects, and I hate that I'm finding so little to put on the assembled models because they already have enough plastic bling on them.

Are the new GW plastic kits the end of the converter? Nah, just gotta use them brains more to advance our modeling and converting skills along with the advances made in these new kits.

Posted by Miniature Tim at 8:25 AM