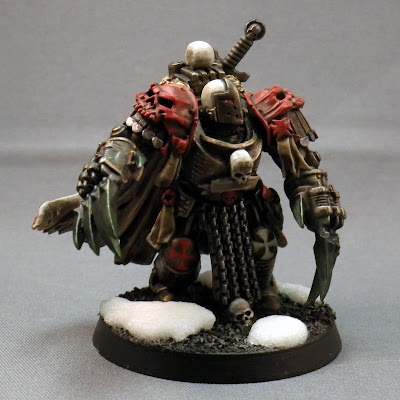 HQs and Dreadnought are done!!

Two of the best things about this commission was that I got to paint one of the new Grey Knight plastics for the first time, before I started my own, and I finally got to paint a conversion I started over 2 years ago. The figure that is being used to count as Belial originally started out as a Lone Wolf for my Centurions. When my friend needed a figure for Belial, and he wanted him with twin lightning claws, I quickly offered up the conversion I never used for him, as I still really wanted to see it hit the tabletop. A few tweaks later, he was ready to lead the Black Templars' version of the Deathwing! 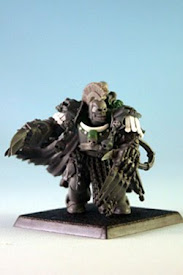 The skull-visage, plumed helm version was the original conversion of the Lone Wolf. The tweaks done basically consisted of removing some of the excess hanging chain, and replacing it with Templars-specific Crusader Seals, adding a Black Templar sword to his gear, and then a more refined head-swap. All serving to tie the figure into the new army better, as well as lessen the savage feel overall. 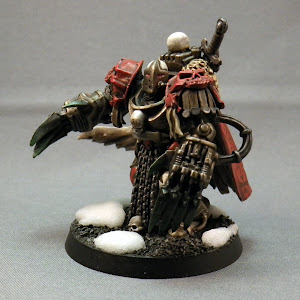 We went with a bronzed armor for him for a few reasons. One was that I've seen a few paint jobs of High Marshall Helbrecht, with his armor painted in a bronzed effect, and I thought it looked great. The others were to help tie him into the other HQ choice, being a metallic-armored Grey Knight, and help set him apart from the rest. 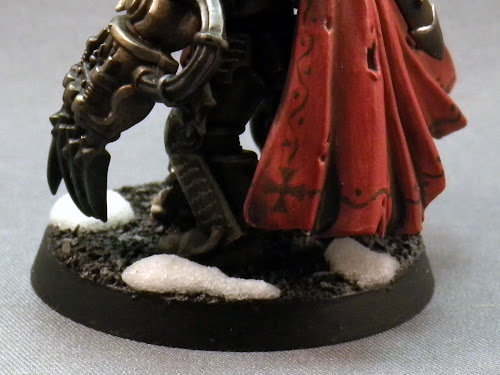 To tie him into the Templars, since he had no sculpted iconography or Templar Cross on his shoulders, I added freehand onto the knee plates, and his cloak. Since entering the Golden Demons the week prior, I used these last figures in the army to practice my freehand. It was fun and fulfilling at the same time to see this figure finally brought to life. 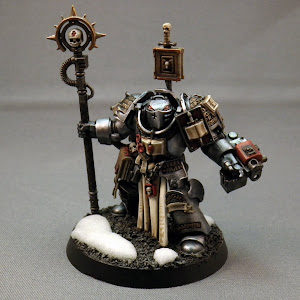 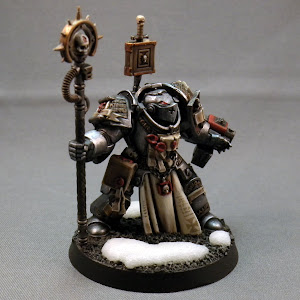 The Grey Knight was a blast to paint. Primed white, I gave it a thin, but complete, coat of Boltgun Metal before washing the entire figure with Badab Black. This served as a basis for the shadows, which I then used thinned down Boltgun Metal to feather back up with in areas. Finally thinning some Mithril Silver, I finished the feathering, as well as some discreet edge highlights. After all that, I thinned down some Asurmen Blue and washed/glazed it into select edges and crevices to "blue" the metallics of the armor. The rest of the figure was painted fairly standard...except for the tabard. 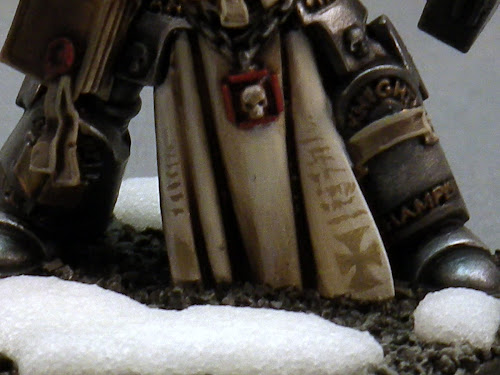 We were originally planning for a black tabard on the Grey Knight, with a Templar Cross on it to tie it into the force, but once I had the tabard painted black... I hated it. It was like a black hole between the figure's legs. So I built up the tabard to a Menoth White, gave it a wash with Devlan Mud for depth, and then blended Menoth White Highlight up to the edges. I then mixed a little thinned and lightened khaki to freehand some tasteful scrollwork and a more understated Templar Cross in the corners of the tabard. 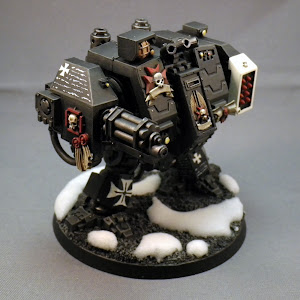 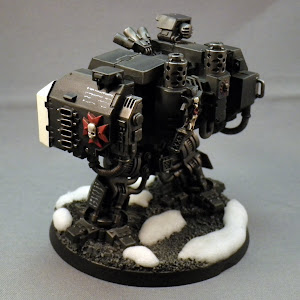 Originally this came to me with just two arms, magnetized. A missile launcher and an assault cannon. To give him some more options, I offered my friend the use of the right arm kit from a plastic Venerable box, and now instead of just an assault cannon, he's got 4 options that include a TL Lascannon, TL Autocannon (converted from some IG heavy weapons I had and a spare Lascannon arm), Plasma Cannon and then the Assault Cannon. I love the modular nature of that kit... So long as you don't glue anything in, you can slot any of the options you want.

The final update for this army will include the Snow Basing you see here for everyone!