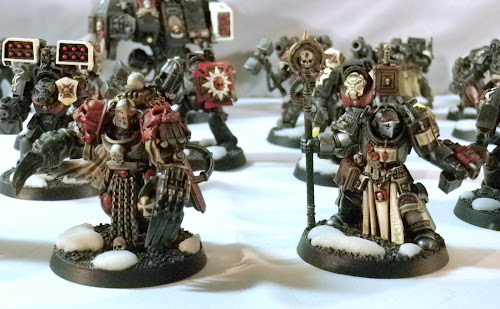 Yes, you read that correctly! The Black Templar Deathwing commission has been completed! There wasn't that much left to do after the last update with the HQs and the Dreadnought...

Or so I thought.


Who would have thought that basing a figure that had already been cemented to the base would have been such a time-consuming endeavor? Well, I for one wouldn't have... Of course, I also construct my bases separately from the figures, and paint them both separately as well.

I started out with an old brush, watered down PVA glue and a mixture of fine and medium ballast. After letting it set up, I painted it Charadon Granite, washed it with Badab Black, and lightly brushed it with the highlight mixture I made for the armor of the figures. This helped tie each figure into their base nicely.

Yes, I had to be careful because the figures were already painted... Please, please, please...don't permanently affix your figure to the base until the base is done. Or at least elevate the figure from the base using some plasticard... Handy little tip from Ron at From the Warp I read on Monday on this post.

Of course, this was also my first time diving into the world of snow effects on bases. I'd just like to give a resounding shout of thanks to GreyDeath from The Painting Corps for a tutorial he did on them not too long ago... See link here. Bless you, Sir, for including a video in that tutorial as it did wonders for my understanding of not only the procedure, but also the explanation of what the consistency of the glue to snow effect should be.

I'm not even going to try and explain... Just go and view his video tutorial. credit where credit is due, after all.

The only thing I will add is that once you have the snow/glue mixture on the base, you can just wet the end of the tool you are using to apply the mixture to the base, and smooth the mixture to where you want it to go. Very helpful in that regard. 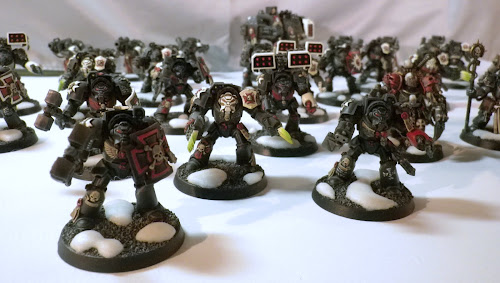 The humidity is way to high in my neck of the woods to think about dull coating this army right now, so I'm supplying my client with a can of Testors Dull Cote so that when the conditions are more favorable, he can take care of that with little inconvenience. 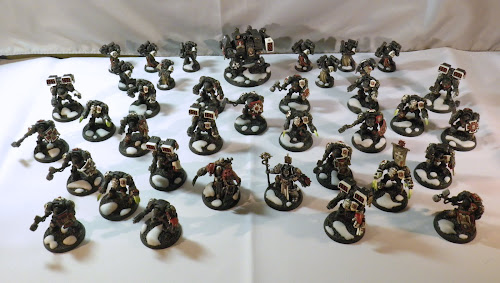 All in all, I'm very happy with the way this force turned out, and am a little sad to see it leave my hands. At the same time, I can't wait to play against it!