Attending Feast of Blades! Who's With Me?!

That's right folks, I'll be in Denver, Colorado next weekend at the Feast of Blades Tournament and Event. This promises to be not only a blast, but the first independent National Event that I'll have attended outside of Adepticon.

So why Feast of Blades?

It started back at Games Day this past July. I met up with Jawa from "The Blood Angels by Jawaballs", Mike Cho and Fritz. Some truly good people that were a blast to hang out with. During the time there, we spoke about something I mentioned in a previous post…a bloggers roundtable, so-to-speak. A time where a bunch of us could get together and have the kind of conversations that normally don't get to happen, and the ones that might take weeks over emails, boards and comment posts that we could have in 15 minutes in person.

Jawa took my idea and ran with it…straight to the Organizer of the Feast of Blades. I got an email not 2-3 days after Games Day telling me to buy my ticket, pack my bags and book my flight as the Bloggers Roundtable was going to happen at FoB. I was beyond thrilled that he thought that much of the idea to run with it, and even more excited that the FoB organizer liked the idea and followed through with it! Friday night, along with a ton of other events, I'll be sitting with a bunch of great folks that it'll be a blast to shake hands with and talk hobby-shop.

I'll also try and enter my Grey Knights in the Armies on Parade contest they are having, though I won't be flying with my Display board. We'll see how that pans out. 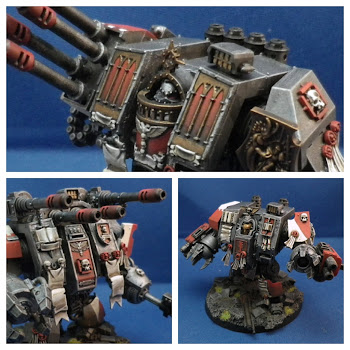 Saturday and Sunday will be spent playing in the 40K Open GT. Why not the Invitational? Because the closest qualifier to me was in Columbia, MO and I just couldn't justify the trip, unfortunately. This will also be some great exposure to 6th edition in a large-scale tournament format, WITH the 2nd FOC, Fortifications and 40K Stamped Forge World units allowed! I'm really looking forward to that mix and see how it affects the games. The Open is also geared towards the Hobbyists as the scoring is 60% Battle Points, 20% Appearance and 20% Sportsmanship and Theme, so I am a happy camper indeed.

So who else is going??? I've got no one from my hometown attending, so let's track each other down, buy each other some drinks and let a good time be had by all!

Posted by Miniature Tim at 9:35 AM