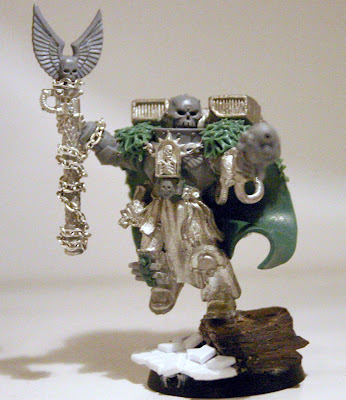 The Black Templars were really my first true army. The first one I ever built from the ground up and took pride in.

And then I sold it.

Yes, yes I know. Even though the funds from that sale made my Centurions possible, I still regret that decision somewhat. At the same time, though, I really dove into converting head-first with this army. Today I'm showcasing the Chaplain from it.

First we'll play "Name That Bit!". Here they are all, see if you can spot them... 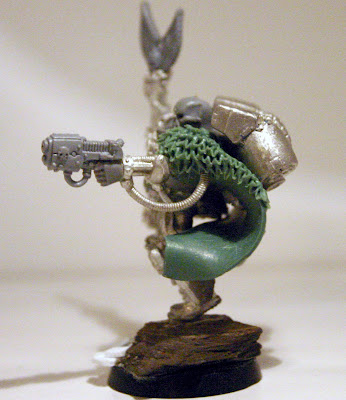 I think that about covers it. Though sometimes having an extensive Bitz box is confusion as to things origins (hence the inquisitor bits 1 and 2). Why the heck I used a metal jump pack, I have no idea, but the metal Justicar legs were a great pose for this figure, and also the reason why I bought my jewelers saw. 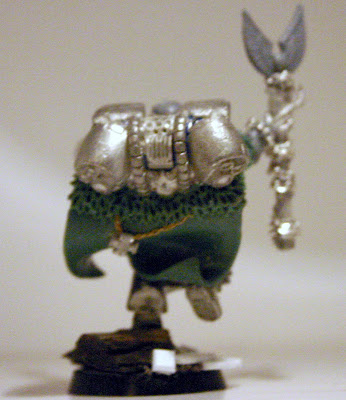 The base was made of some slate I got from taking a hammer to a slate tile I picked up at the hardware store for a couple bucks, and some Evergreen plasticard tile sheets, with some ballast placed discretely, and static grass for finish.

This model was so much fun to piece together... At the time, which was about 2006, this was the most extensive work I'd ever done to a single figure. Heck, I had never even touched Green Stuff before this army, let alone sculpted full, flowing capes and fur!!

Of course, that's partly my point right there, which I'll expound on at a later date I'm sure. There is nothing daunting about conversions or Green Stuff work, if you just get your feet wet and learn, you can pull off some amazing things. And you'll only get better from there.