Project Grey Knights: From the Ground Up

So I've taken my Centurions to Adepticon now for two years in a row, and wanted to bring something different to the table this next year. I've got a ton of ideas in my head for future armies. My next huge, army-wide conversion endeavor will most likely be a Tau force. However, since their new codex is rumored to be released sometime late next year, that ambition is a ways off.
So now what to bring?

After already painting an entire Deathwing army on commission, and committing to entering at least three figures into the Crystal Brush competition next year, I didn't want to invest as much time as I did into my Centurions. Considering that my first purchase when I got back into the hobby back in 3rd Ed. was Grey Knights, and that they have the potential for a low model count, they were a logical choice for me!

And no, it doesn't hurt that they have nice new, shiny plastics and a great new Codex.

When I subtitled this "From the Ground Up", I wasn't kidding. The new Grey Knight kits are so great, there's not a ton to do to them when thinking of conversions needed in the army. I'll have my centerpieces that will involve some heavy converting, like my dreadnoughts, but other than that it'll all be about the poses and atmosphere. So when I started the concepts for this army, I also started thinking about their bases and display base.

I wanted to do a more urban theme for the army, something gritty and war-torn. Since I wanted to keep this easy on myself, I went straight to resin bases for my army. Unfortunately after pricing out what I'd need for the bases, and considering other hobby "investments" I want to make in the near future, *cough* Ogres *cough*, I had to reconsider this. So instead I dug around my hobby closet and found five key components to make my bases with; Plasticard, Plastic Rod, Cork, Ballast and Static Grass.

Here are some examples. 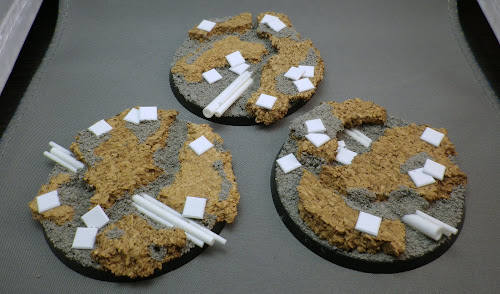 After all are primed and painted, I'll be adding small, key patches of static grass to them. This will break up the ruined urban color scheme with small little pops of color. The display base will then tie into the miniatures' bases using many of the same materials as well as pieces of ruins from the Imperial City plastic kits.

I haven't actually done extensive work on bases like this since my Templars way back in 2006. While it is a time sink to put this much work into bases, it's also refreshing in a way, every base being unique in it's own right. Of course, the flip side of that being that I'm looking forward to my next army as well, if only to take a break and use resin again for both the detail and quality, as well as the convenience!