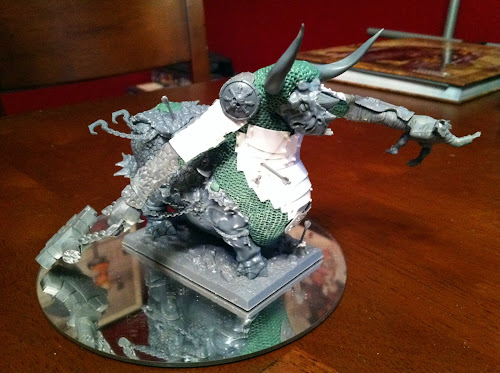 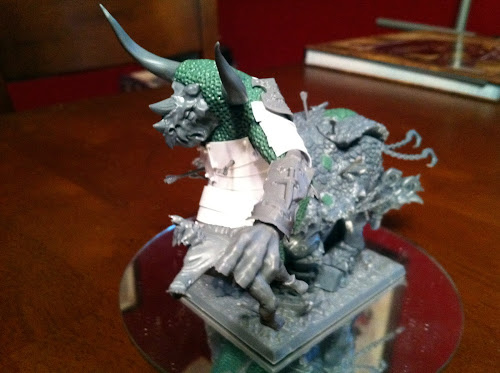 What I ended up deciding was I was going to make the savage, brutal and frankly more blunt nature of the Stegadon the inspiration for a different take on Kholek. I took off the head of the Stegadon with a hobby saw, popped off the horns to be used later and carved out just the front of the head and snout of the beast, to be used as Kholek's head. Then I assembled the upper torso of the Giant, and carved out part of the Stegadon to help fit the GIant Torso to the front, centaur-style. I chose to use the Giant arms that had him dragging a large piece of architecture on a chain behind him to add a bit of motion to the piece, as well as the other arm holding his, erm, lunch. The head was a combination of the Giant's neck, the Stegadon's face and snout, and the horns repositioned.

Now that I had the basic structure of the figure complete, it was time to bring it all together. I sculpted a massive chainmail shirt for Kholek. This both hid the joins in the conversion, as well as gave me a nice basis for the plate armor to be bolted onto! That was created with thin pieces of plasticard cut to shape and layered on, with rivets made from plastic rod in key corners and places along the chest and stomach, back and arms. I also used various shields from the Giant sprue and Marauder horse to use for shoulder armor. 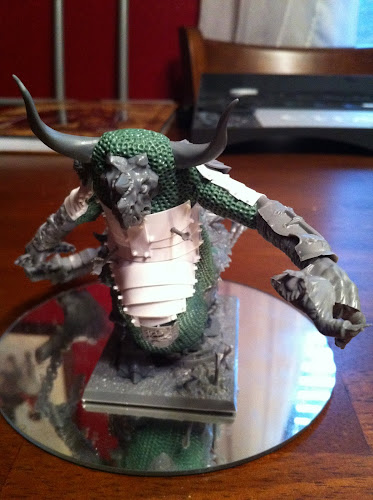 To give the piece it's finishing touches I drilled into parts of the armor and Stegadon back to place arrows that have sank in, obviously to no avail or consequence. I positioned hook flails taken from the Marauder cav kit to continue the savage look and based him on the scenic base that came with the Giant kit. 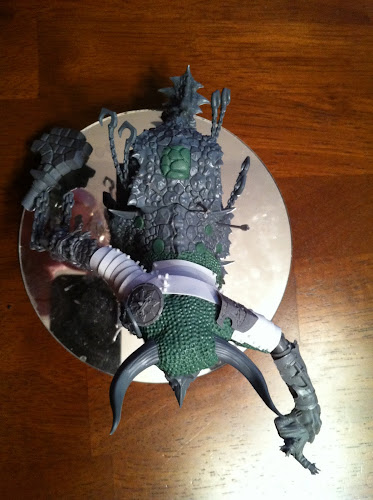 I'm very pleased with the way Kholek came out. While not exactly like the picture in the army book, nor wielding his hammer from there either, I find him a satisfying interpretation. My client was happy and in the end, that's the main thing that matters in a commission. 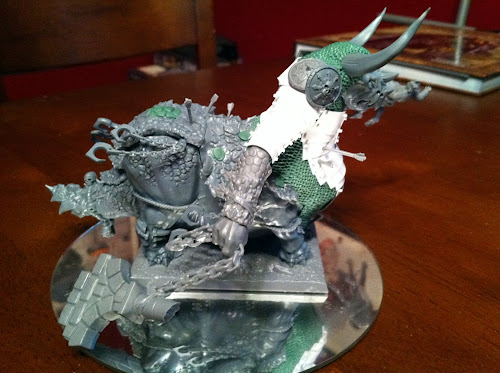 Tell me what you think of him!