What’s A Little Scale Between Friends?

Ever since I began wargaming, there has always been issues with scale discrepancies between models within a game.  From FASA’s Battletech, to GW’s infamous Rhino that’s supposed to fit 10 Space Marines, to True-Scale debates, and so on.

Lately though with my head-long dive into Infinity the Game, there’s been a seemingly steady creep of scale differentials between old and new models for Corvus Belli. It has been said before that not every human being is the same height, armor adds bulk and height in different ways from different makes and models, but it can’t be ignored that the newer, 3D sculpted models are of a larger species than the older, more traditionally sculpted models.

What I won’t do here is carry the "True Scale/Marines just need to not bend their knees" debate into Infinity.  That horse has been dead a long time.  But let’s address the supposed “scale creep” of Infinity, shall we? 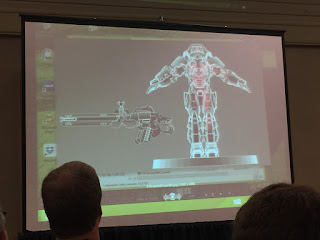 To begin, I would point to a picture (above) that Carlos showed at GenCon on how they came up with the new Azra'il in scale and size before we dive any further into this topic.  CB is taking scale very seriously right now and I’m very happy for that.  How how does that address the existing line of figures though?  What’s a solution for people who find this scale difference a problem?

One solution that has been offered is to become mindful of purchases for consistency, only buying what said player feel fits with the other models that person plays with.  If that's your solution, then awesome, I'm glad you can come to one in relation to your needs as a hobbyist and gamer.  In the end though, is it worth it?  You’re severely hamstringing yourself in terms of gameplay and you could very well be waiting a while before even line troops get resculpted to your perceived “proper” scale.

I’ve also been told that Infinity fans will easily shrug off criticisms and ignore the problem…I disagree with this though.  How?

Well, perhaps a better way to look at it isn't that we're shrugging it off, but more that we are consciously making the choice to not let it affect our enjoyment of a game we want to play, and models we want to paint.  We would rather promote, nurture and help grow communities where we can disagree at times and still enjoy the game and each other.  Is everyone going to be satisfied? No, of course not. The only thing that happens when you try and please everyone is that not everyone is pleased.

You have to ask yourself, does it really truly matter to your enjoyment of the game in the end? When you are playing with your toy soldiers on the tabletop, laughing with the person across from you and having a blast, does it really matter that the scale is a touch off?

“Im an artist. The visual aspect of the game is paramount. This game was chosen for how it LOOKS.  Yes, I know CB is working on it, they pretty much are composed of Growing Pains molecules, I get it. and I much much much prefer the new models to the old, so its going in the direction I’d like... but those old models are getting harder to stomach.”  (This is a paraphrased comment from an Infinity Facebook Group comment)

As a fellow artist, I can understand where this type of sentiment is coming from.  You pay so much attention to the aesthetics of the piece you are working on, that you can't help but dissect then because you are investing so much time, energy and work into it. I get it.  Heck, that's why some people learn to sculpt figures.  They want to paint a figure or aesthetic that doesn't exist to then yet. I'm not suggesting this for yourself or anyone in particular, but it's what I've heard from sculptors in the industry.

...and quite frankly, one of the reasons I'm pushing past architectural 3D work and learning digital sculpting myself. But that's a whole other discussion.

I'm honestly not dismissing the differences in scale within Infinity the Game because I'm blinded by my love for the game or anything like that, nor am I trying to dismiss anyone else's wish for consistency.  I'm just saying that I'm making the conscious decision to not let it get to me as much as possible. Will I go out a buy the old PanOceania Croc Man sculpts now that I own a new one? Probably not...but dang if Tom from MayaCast/Tom Schadle Miniatures didn't make some of those older, smaller sculpts look really good with his paint job on the latest force he put out. I'm also making the decision to not let it bother me on the tabletop during a game as much as possible. We're playing a game and having fun with long time friends, new friends, and friends we don't get to see but maybe once or twice a year.

I can only answer for myself in saying no, in the end the debate over miniatures scaling with each other doesn't matter that much. There will always be slight inconsistencies when you have difference artists and sculptors all working on one game line, and I can live with that. Why? Because I enjoy the game, enjoy painting the models, and enjoy shaking hands across the table after a good match.

After all, what’s a little scale between friends?