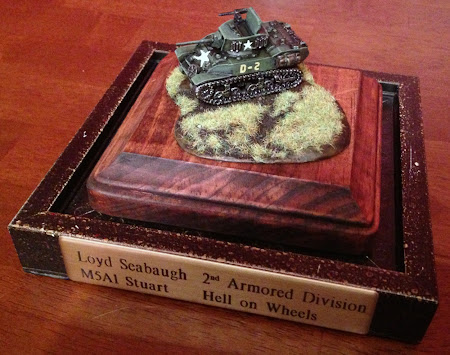 No, I haven't yet dipped my toes in playing Flames of War yet, though I do love their detail at such a small scale. I do, however, have a love of history, both of ancient and more recent times.

I also have a wife who's grandfather didn't just turn 90 last year, but is a veteran of WWII, 2nd Armored Division, Hell on Wheels, 82nd Armored Reconnaissance Battalion, and wounded in the Battle of the Bulge.

This man is a hero of mine, and the M5A1 Stuart was his tank.

Loyd Seabaugh is a big man with a big heart, and he remembers, 70 years later, coming in on the second wave onto Normandy. He remembers sights that he will not talk about, but when you ask him about the war, he remembers what he drove. His service took him to Africa, and then into the European Theater during WWII. He doesn't talk about the war hardly at all, but he currently lives with his fellow veterans, a retired Ford man and one of our great servicemen who fought for a free world. 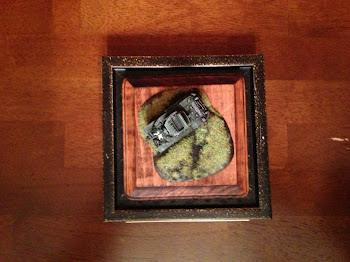 I'll be honest, there was more time spent in research of this project than there was actually painting the tank itself! I called my father-in-law and each of his siblings, as well as some of the older cousins, to piece together his service history, his Battalion and his Division. Diving into the motor pool of the 82nd Recon, and finding out the history of the light tanks, from the M3, to the M5, to the M24. There is a chance he piloted the M24 Chaffee, but knowing he was in Africa as a tank pilot before entering Europe, I know he sat in the driver's seat of the M5 Stuart. 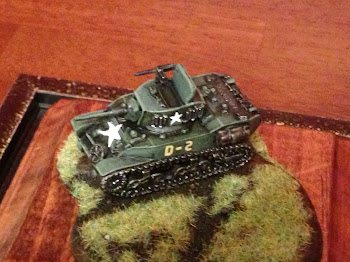 After the research was done, now I had to find the model!!! Luckily, the fine folks at Battlefront Miniatures and Flames of War took the work out of the search for me. I purchased 2 Stuarts, just in case I screwed one up somehow, and a stowage blister. Putting the tank together was an easy task, and looking at some pictures of the M5 online, a couple pieces of stowage and I felt I had a good representation of the tank, mid-campaign.

Now I had to dive back into research-mode and find out how to paint the tank! You'd think that we all know the olive drab green color, but I didn't know the division-specific markings that all tanks have. Thankfully, a Google search brought up a painting titled "The Reconnaissance Party" by Mark Karvon. This painting happened to feature the M5A1 Stuart, in the service of the 2nd Armored! I had my Division Markings! 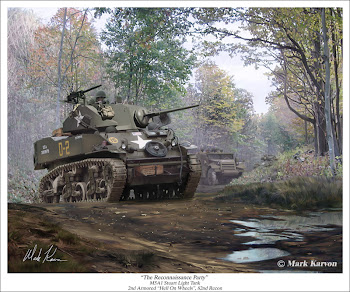 The actual painting techniques used on the tank included some selective drybrushing, smoothed out with a wash, blended back up to highlights, and finished with some selective glazing. The freehand was done with a touch of the basecoat color mixed into Menoth White Highlight, thinned out and carefully applied. I then build a custom base for it to sit on, stained a nice piece of wood and fixed it to a framed base. W finished it off with a custom etched plaque, reading: 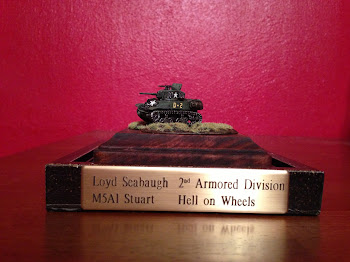 I know I didn't spend much time actually describing how I painted it, the process or exact methods to build the base but there is one last thing I will share with you all. When my wife's grandfather opened his gift, this 90 year old veteran looked up at me with tears in his eyes and said "That's my tank...That's my tank. Thank you."

You know what? One of my heroes told me 'thank you'. I don't care how I did it.