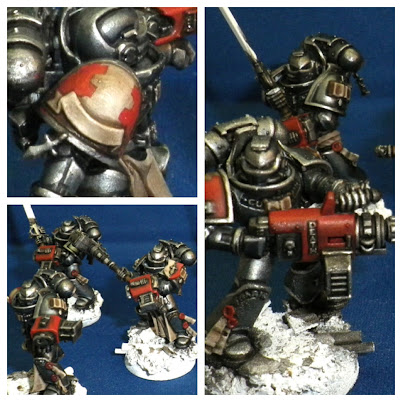 I had the opportunity to play in a local Combat Patrol tournament last night, and I took my Grey Knights. A friend of mine I between rounds asked why I hadn't posted an update the army lately. My answer was "Well, the first squad isn't done yet...". His answer?

"So post something in progress, anyway. Show folks that you're actually working on them."

He had a good point.

Besides, it gives me a chance to update the recipe for my gunmetal armor as well! It's a bit more simplified than the last formula, but the end result is still what I wanted.

1:3 ratio of Asurmen Blue to Water glaze in the shaded areas

Highlight of 1:1 Chainmail and Mithril Silver 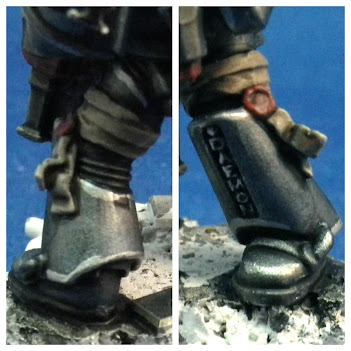 I've gotten the Gunmetal armor done on these, as well as the reds, which the recipe didn't really change for those. I really like the way the Asurmen Blue glaze gives some depth to the metallic armor. The "white" still needs its final feathering of Menoth White Highlight, then it'll be finished.

I've gotten each heraldic shoulderpad different on these, and I'm a little challenged of how I'll work the rest of the heraldry for the rest of the Knights, considering they all have personalized heraldry. I'll figure something out though. 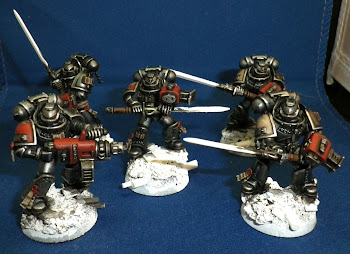 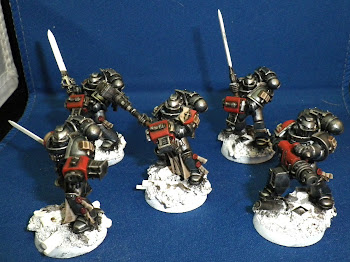 Short, but sweet update. I'm happy with the progress on them, I just need to step up the pace a bit is all! A lot to get done before Adepticon!

How's everyone else coming along?