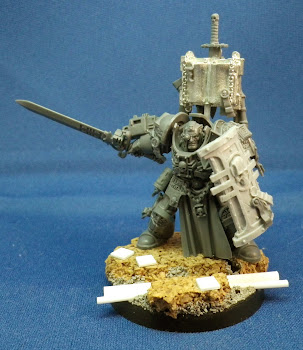 After having finally finished assembling my Paladins for my Grey Knights Army that I'll be bringing to Adepticon next year, I took a look at my list of things to finish and pondered what to build next…

I was beyond done with stock assembly considering that was the vast majority of this army, as well as the reason I've yet to really update anything until now here, so I decided to break up the last three things to model to mix things up a bit…

As I really didn't feel like using the actual Kaldor Draigo figure, potential finecast issues aside, the first thing to do was figure out where I was going to get myself a Storm Shield that would do justice to this Grand Master of the chapter. After diving into my bitz and kits, I came up with two options; the shield that came with the Boarding Maring special event Forge World figure, or the shield that came from Forge World's Inquisitor Hector Rex.

Why am I considering actually parting out expensive Forge World models for one small piece?? Oh.. right, cause that's what I do. Dangit.

My first choice was actually the Boarding Marine's shield. I haven't seen a Draigo conversion that used it yet, and I thought it might look different. unfortunately the proportions just weren't quite there. Back to Hector's Shield! That's okay. He's already in Terminator armor, which makes the swap easier, and I bought him mostly for his servitors anyway. A little clipping and shaving to fit, and the shield works great!

The main body and tabard is, of course, the Justicar's kit pieces form the terminator sprues, as is the sword. Where I used that torso on the Paladins, I trimmed down the flaring collar and on Draigo, I kept it. He's also the only figure in the army without a helmet on.

Swapping the storm bolter was beyond a breeze with the new Grey Knight kits. Again, a little shaving of the forearm and it fit great. I clipped off the drum magazine and shaved it clean, then tacked on a power armor Grey Knight's magazine to the other side. 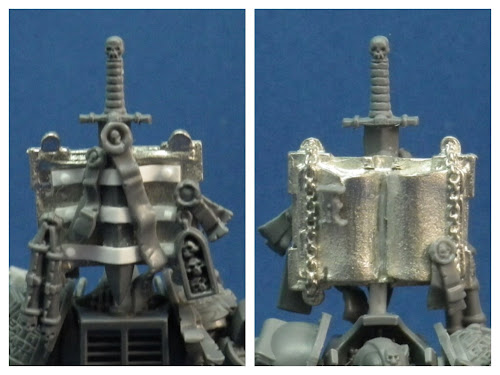 The back banner was another custom build. I did not want a banner bolted to his back, I just felt that it didn't fit my figure. My Paladins, however, did all have the little back ornamentations that I like, so I just up-sized one for Draigo. Using an old Ravenwing bit for the book, I very carefully drilled up through the binding and slid a plasticrod through it to mount it on the figure. I grabbed a handless-hilt and a spare blade from a power sword to finish the book and sword icon, and bolted it to the back with some very thin plasticard straps, the bolts quickly made by trimming off pieces of plasticrod. After that is was just adding assorted purity seals and other bling to finish it off.

Over all I'm very pleased with the figure. Are my hands itching to do more with him? Of course the are! I REALLY want to sculpt a back cape for him like GW's Draigo has…but I won't. He's done. He's easily identifiable as special, and the Storm Shield very quickly marks him as Draigo. 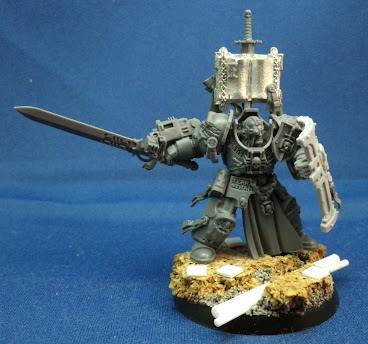 What does everyone think? Anything you'd do different, speak up in the comments! I love to hear feedback, even on a simple conversion like this. Without constructive criticism, we don't grow!

Posted by Miniature Tim at 8:00 AM