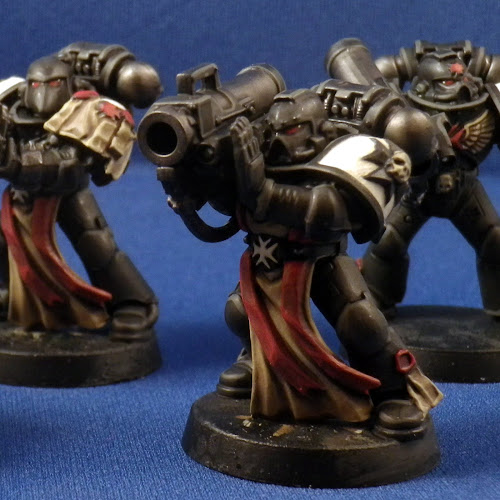 The Devastators are done! It always surprises me how much more time Terminators take me to do than a powered armor marine does. They aren't that much bigger, and the painting premise is the same, but it usually take me about half again as much time to paint one Terminator as it does to paint one standard marine.

I approached the two Dev Squads armor the same way I did the Terminators, in reference to the black to granite shading, highlighted with the 1/1 ratio of granite and bleached bone mix for the highlight. Once I finished that, I dove into the tabards...

My client glued the arms onto the body, blocking the chest details on most of the figures. That tends to complicate things. Oh well, nothing I could do about it except work around it, right? This is why I buy multiple brush sizes. My standard size 0 brush, my workhorse, wasn't the right tool for the job to carefully slide into the small spaces left for me to paint within, but the size 0/3 was!

To interject a small point here, while it is possible to paint under arms glued across a chest or other hard to reach areas covered by parts, you will always save yourself time, and make it easier on yourself, by leaving the arms off of figures that would obscure detail, painting both the torso and the arms separate, then glueing them together. It may take some pinning on your part in the beginning, but you'll be glad you did it in the end.

Moving on once I solved that little dilemma, I based the tabards in the khaki I've been using, giving them a good wash of Devlan Mud before building back up a few of the highlights to help the peaks of the folds stand out a bit. The same technique was done for the red ribbons of cloth flowing down from the skulls and the wax for the seals, using Mechrite Red as the base, washed with Devlan Mud, highlighted with a little blending of Khador Red.

The metallics were done per the standard Boltgun base with a Badab Black wash, which is honestly my current favorite way to make a more matte finish on a gun or chain blade, something that's supposed to look utilitarian.

So far so good on this army, and I'm pleased with the progress. The Dreadnought is currently on the painting table, with Belial and the Librarian all that is left after that. Well, that and the basing.

If painting this army has taught me anything, it's that pure white so rarely belongs on a model, especially these. I'd even go so far as to say even on a White Scars army, but that's another post.

Posted by Miniature Tim at 7:57 AM