Thematic Model Variety and You 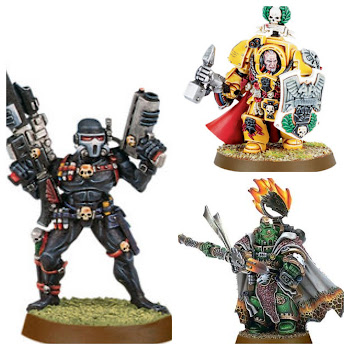 When I say "Vindicare Assassin", what's the first model you think of? How about "Lysander", or "Vulkan"? I'm guessing that most of you immediately think of the stock models supplied by Games Workshop for these characters and unit entries. Though maybe not for Vulkan, that fig is hideous. Regardless, since they are supplied with specific sculpts, those are the ones we should think of, and should use in our games, right?

The easy answer is, you don't have to. It is your money, you buy and play with your toy soldiers as you please. So long as you adhere to the concept of WYSIWYG, who's to stop you? 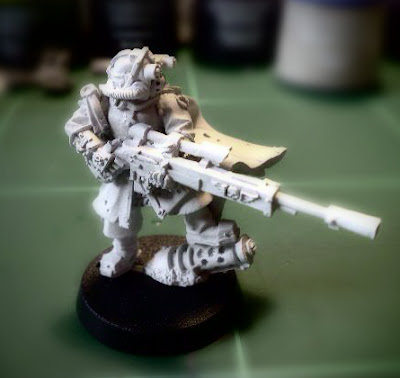 Above you see the figure that I'll be using for my Vindicare Assassin in my Grey Knights army at Feast of Blades. Now for that particular unit, I've actually got two stock model choices to choose from, each in a different pose. However, the one where the rifle is standing straight up I hate, and the figure in general just doesn't scream "Grey Knights" to me. See, I don't have any Inquisitorial elements in my force, no henchmen or anything of the sort. So the black bodysuit assassin stuck out like a sore thumb to me in my army. However, the Vostroyan Sniper above works amazingly well next to my Grey Knights. The regal look to his wargear, the impossibly long rifle and full headgear, with his camo cloak rippling in the wind just speaks of nobility and pomp to me. This is the feel I needed out of a figure that would normally contrast poorly with the Grey Knights figures. The work needed to convert him? Barely any at all. On his shoulder, there is a patch with a raised "V" on it for Vostroya. I simply shaved that smooth, and will paint an Inquisitorial "I" on it instead. Done.

"But Tim, isn't this just an elaborate way of stating the 'Counts-As' philosophy?"

Yes, yes it is. My point here isn't just "Counts-As" though, it's specifically taking into account the look, feel and theme of your force to then choose how to represent that on the field. You can slap a Power Fist and a Storm Bolter onto any old Marine and call him Kantor, but it takes imagination and forethought to make a figure fit into your army's theme.Maybe you play Iron Hands and you want a Counts-As Kantor…what about using a suitable bionic marine, or techmarine figure, with a Servo Arm (Power Fist), a mechadendrite with a Bolter attached to it while holding another Bolter (thus representing a Storm Bolter) in his hands? Now he's not just a Counts-As Kantor, he's an Iron Father that truly fits the theme of the Iron Hands.

So speak up now. I've shown you mine, time for you to show me yours. What have you done to shake up the blah-ness of your standard "Counts-As" models and truly fit them into your force's theme and look?

I'll be updating the painting of my Vindicare over the next week or so before Feast of Blades to show some WiP shots of him as well.